When I was a freshman in college, so naive and so aroused, in so many ways, I stole -- that is to say, borrowed without checking it out on a very long term loan -- a little red pebbled bound copy of The Gospel of Ramakrishna, some gift to the college library decades before my enrollment, by some odd people, certainly not the Anabaptist Brethren who started and supported the college, oddly very liberal in its orientation. Not quite sure who I was, what "faith" I was, even really what gender I was, I carried that little pocket-sized book around with frosh course text books, hoping to attract attention of certain higher level philosophy students I was in a class with. (It was Logic; I was nuts.)  I was clearly seeking a spiritual master.

The loan was shelved among my personal books for 15 years, (but at the library it was likely written off; no one had checked out the book before I "borrowed" it anyway, and an inventory would have just listed it as lost).  Then I wound up working in distant city, in another institution of higher learning's administrative offices (as a media relations person).  A guy in our department was leaving his job to presumably "move up" to the development office of my alma mater, where there was clearly an empty space on a library shelf owing to my freshman insolence.  I gave The Gospel of Ramakrishna to him to return to the college library. (I also gave him a vinyl LP of The Electric Prunes' "Mass in F Minor."  He was leaving a Catholic University for a school very distant from that spiritual persuasion.  I later got a CD of that music; it's not really that compelling.)  This all seemed like the right thing to do, partly because my husband was at the time in Ph.D. library studies, and I vicariously felt some moral obligation about having not exactly "borrowed"  the book, but also because I was no longer into that particular kind of text. (Things have changed.)  I have no idea if my colleague did my bidding; I suppose I could check to see if it is back on the shelf.  My class is having a 50th Reunion this spring.  I have no intent to go, but the class is  designating special reunion gifts to benefit the library. I could give a new copy of the book with my repentant name in it! 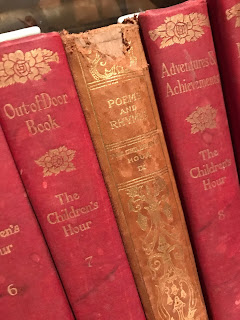 But I wish I'd kept it.  Beginning my seventh Chinese life cycle, I look back on those times: wasted opportunities? wasted time? wasted mulling? Just wasted?   I know something about Ramakrishna now, exploring various mystical paths with many teachers on many paths, and even though I have a PDF of the text on my laptop, I wish I could actually hold that little book, like a small red Bible, literally feel what must have captivated me nearly 55 years ago. Oddly, I also am lamenting  the vanishing of a late 19th century "Family Bible" that has gone missing over the years.  I would like to heft the book, in my memory very large with a Gutenberg-style typeface, to caress the carved and gilt-embossed cover, to review the family genealogy notes on the front endpapers, knowing I may have an exaggerated memory of all this.  I would also want an elaborate carved standing pedestal at or from which to read or recite passages as stipulated by the Anglican and RC liturgies (despite the likelihood that the Bible was owned by Anabaptists and/or Calvinist/Presbyterian Protestants).  The Family Bible was certainly a KJV;  I have multiple versions of the Tao Te Ching, so why not enjoy the Legge of the Bible?

The popular but annoying clutter-clearing guru, Marie Kondo, says we should have no more than 30 books in our possession at any given time. I have at least 30 in my heart that went missing or were abandoned in moves that I wish I could hold and page through and shelve, among them:

--My Mother's French Dictionary, a green leatherette pocket-sized book with a rooster on the cover. Except for the rooster, it looked exactly like a New Testament inscribed with her name in elegant script, which I do still have. C'est la vie.
--My Mother's copy of "Emerson's Essays."  Another easily available text, but still, I recall the dark-covered book with deckle-edged pages and would like to page through it it as she did.
--My Mother's copy of "Green Mansions", with elegant tropical illustrations.
--"Poetry and Rhymes", Vol. IX of a complete vintage set of the "The Children's Hour", an early 20th Century reading program for children, that went missing during a move.  My set, bound in crimson fabric with gold lettering,  has bookplates indicating original ownership of a maternal great aunt who encouraged me to read. I have obtained another copy of IX, more lux in a brown leather with gold imprint, but it doesn't match the set and lacks the hand-painted bookplate.
--My white leatherette copy of The Book of Common Prayer (1928), which I carried at my wedding; went missing with "Poetry and Rhymes."
--Not a book, but a stamp album that went missing with the others.  Had a complete run of the National Parks issue and others collected by my Dad,  a lot of late '50s and early '60s mints, and a lot of stuff given to me by a paternal great uncle, a stamp and coin collector, and a bit of a womanizing lecher.