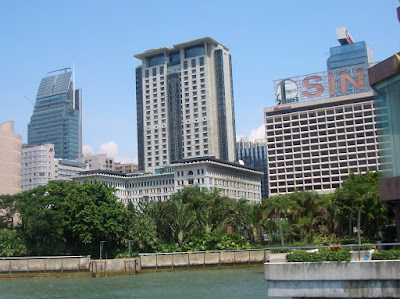 After watching the terrific Hong Kong yin/yang cops and criminal film from 2002, Infernal Affairs, I was compelled to revisit photos from my brief August stop in Hong Kong on the way to Xian and Wudang. I surprised myself with this shot of Kowloon, from somewhere near Tony Leungs' (both Tonys) handprints on the Walk of Hong Kong Film Stars. Of course, the "SIN" in the photo is part of the signage of SINOPEC, the Chinese oil company, and has nothing to do with sin (unless you equate oil with sin.)
Infernal Affairs is a great movie, with superb acting and a thoughtful plot, (Tiny) Tony Leung Chiu Wai and Andy Lau giving a synchronized performance like Pacino and De Niro. I don't know why Scorsese had to remake it. But I also watched the same way Hawaii folks enjoy Hawaii 5-0, Magnum P.I. or Lost, to see the sets as much as the action. I was a little disappointed that in Infernal Affairs, the cops/criminals never took the ubiquitous Star Ferry (see below). In fact except for a drug deal gone bad, there weren't any at-sea scenes at all.  Some nice views of the harbor, though.
Maybe it was because the whole country was holding its economic  breath for the Olympics that I was blessed during my visit with a day of clear blue skies and fresh air. The last time I was in HK, in August 2001, I was distressed at the deteriorating air quality, although some of the sunsets seemed worth it.  In late August 2008, I enjoyed stunning views of the harbor, but just three weeks later, things had changed.  Maybe sin and oil are the same thing. 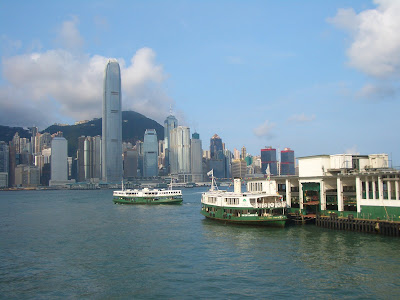 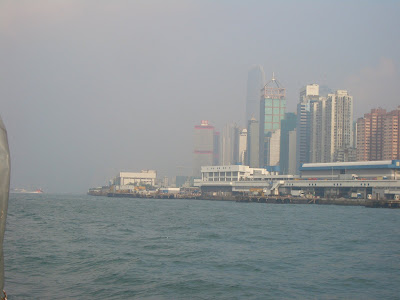 Wow! The air quality is bad!!
But that first shot is beautiful!

Blimey, the difference is scary. What a stunning place though.

I see now why SINOPEC are gonna hunt you down. You have brought disgrace upon their company.