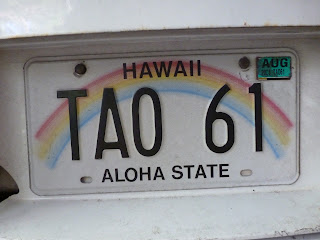 I took this snapshot a couple weeks ago when I needed to get updated tags for the license.  Someone unofficial in my condo, channelling Cultural Revolution neighborhood nannies, reported obliquely that my registration and inspection appeared to be out of date. She couldn't just put a friendly reminder note on my windshield?

And never mind the broken-down beige Dodge Roadrunner on the other side of the lot that has NO plates or tags and has been sitting there for months and months dripping oil.  I take that back. It does have a Rainbow State plate: it says ALOHA, attached to the exposed front end of the car, the kind of thing you buy in souvenir shops. If anyone would have a vanity plate that said ALOHA, one would think it might be the Governor. Or the head of OHA.)

I was happy to be reminded about the overdue inspection, but, as the image indicates, someone had apparently ripped off the annual tags, down to the level of 2008. I do have all appropriate registration paperwork, up-to-date.  I took the picture as evidence to assure the DMV of anything they might want to know.  But how easy it was to replace. A fifty-cent charge for a new tag.  I find it strange that someone would steal the tag which also carried the TAO 61 plate number.  I find it strange that my "neighbor" would care.  I find it strange that we make of life so much red tape, which just generates more.

There's a Tao lesson here, even in TTC 61, about, on the one hand, regarding people who point out your own faults as being benevolent teachers, and on the other, not meddling in the affairs of other people.  The Cultural Revolution can be understood as too much Mao, not enough Tao.  At least in my condo, there is no sloganeering and no way would we put big character posters on the walls!  Although lately, a lot of things like reminders not to let your dog pee in the elevator (oh, I forgot) and "important community events" notices have been popping up.  Generation of red tape and rules just makes people want to circumvent them. Oh, how I long for a cave of my own.

POSTSCRIPT:  Evidence that our recollection is not always correct, I note on arriving home tonight that my comment about the leaky Dodge is not quite accurate.  The license plate does not read ALOHA, but HANG LOOSE.  I'm pretty sure the gov would not have that on the Rainbow State limo.  Although...considering how he used to campaign, driving around in an old New York Checker taxi cab, and stand along the roadside on a milk carton to wave at passing drivers (the standard Hawaii campaign strategy), maybe not so far-fetched.
Posted by baroness radon at 1:53 PM