I once edited a monthly progress report for a scientist I worked for who had written the astonishing and confidence-building reassurance, "We are starting to begin the preparations to plan the event, an activity that will continue for several months." I don't know if that satisfied the government agency funding the project, but it did make the subsequent editing easy: I just struck out a level of planning each month until the event happened all by itself. That seemed ludicrous to me then, but now, on Gregorian/Solar New Year's Day 2009 it seems like a great approach. I will be using the next three weeks to get ready for the next New Year's event, Chinese Lunar New Year, beginning Jan. 26. 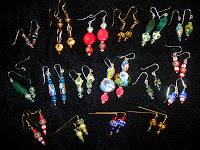 This is a grace period during which I recover from the festivities and feasting and fund depletion that started at Thanksgiving. The solstice happened (all by itself) while we observed our wedding anniversary with a dinner at a favorite restaurant at our favorite table. Later I started shopping and creating gifts for the girls in the office: I made 52 pairs of earrings, most of which look like hippie-styled Christmas ornaments. (Well, they are, really.)
I added a pan to the Wizard's All-Clad collection, but had the most fun on Christmas Eve at the hardware store. Here comes a suggestion to women who are stymied by their SO's practical nature. What to give a renaissance man who loves soldering irons and socket wrenches? (My artist friend says that tools for guys are the same as makeup for gals...you can never have too many brushes or eye shadow colors.) I had tried to go to our local hardware store, the venerable and charitable 100-year-old City Mill (eschewing Home Depot and Lowe's, those carpetbaggers) the evening before but arrived just at closing. The clerks were moving all the outside displays into the already darkened store. I asked what the hours were for Christmas Eve. One of the guys looked at me compassionately and said, "If there's something you NEED right now, I can still get it for you." If my toilet was running or I needed a new deadbolt, he would have made the effort to help me. I told him I was just planning to browse the aisles for guy-stocking stuffers, but I would be back next day. I believe had I been at one of the big-box stores I would not have gotten that genuine concern. That's why I like to shop local.
So next day I spent an hour pulling all kinds of odd weird cheap things off the City Mill racks--colored cable ties and etching tools and some Dremel bits, drill stops (a BIG hit!) and various glues. I had to ask for some assistance, and it may have been from the same guy I talked to the night before. Boy was he impressed with the haul in my cart! "Lucky guy," he said. And, now I know my way around City Mill! I got this notion because the Wizard usually loads my stocking with office supplies, the funny kind things you never buy for yourself, but eventually come in handy. Colored paper clips, map pins, post-its, hi-lighters, strange tapes and pens. He probably goes to Office Depot, but I forgive him: he also includes mini-bottles of single-malts and chocolates.

On the first day of Christmas I was delighted to find something under the tree I hadn't ever received as a young girl, not being quite in the right demographic at the time for a Barbie Doll. And there it was (I had pointed it out to Santa because it was so funny), Tippi Hedren, Alfred Hitchcock's "The Birds" Barbie, complete with attacking crows and nice stiletto shoes. Now I want a custom Barbie, "Baroness Counting Kolea." She will come complete with a white Mazda Miata (license TAO 61), 32 makeup brushes and an mini-nano-Barbie iPOD.
And last night, New Year's Eve, and the 7th day of Christmas (yes, the 12 days of Christmas come AFTER Dec. 25) my true love gave to me an obscure and hard-to-find Alibris-sourced book which I regrettably discarded when we moved to Hawaii: The Sex Life of the Foot and Shoe: An occasionally indecent exploration of the sexual history of feet and footwear, published in the U.S. by Penthouse Press, but originally by a British house (it figures) in 1976. (I had discarded the Penthouse version; now I have the British one.) Written by William A. Rossi, a podiatrist who one suspects was also a bit of a foot fetishist, it is a fascinating treatise on the largely erotic significance of shoes, with sections on Chinese footbinding, stilettos, biker boots, and the people who love shoes. Since I always notice shoes, and have quite a collection of footwear, I was delighted to have this book back. (I would be even more delighted if I could still wear my Ferragamo stilettos and restore the black patent leather on my 3.5 inch Bally's; alas chronic plantar's fasciitis quite likely caused by those beautiful shoes obviates my indulgence. I am doomed to protect my Bubbling Well point with Tevas, Chacos, Crocs and Naturalizers! All very fine and comfortable, but utterly sexless shoes. Well, some of the Naturalizers are cute.) The ironic thing, I was a little late getting home last night because I had stopped at Macy's (which used to be the venerable and local Liberty House) to buy...some shoes. And I have an appointment this weekend to get a pedicure.
So this morning, after another of the season's dramatic series of dark and stormy nights (Dec. 26th's responsible in part for the power outage that made national news only because Obama was on-island) I am considering The Resolutions. No more extravagant shopping (which is why I bought all those shoes last night), eating right, getting exercise (walking in the Tevas), meditating to mitigate all these worldly desires, treasuring my friends, working smart, clearing clutter (yeah, right, see Yin post, A Perfect Mess). This year, which is coming to a close but not today, the Year of the Earth Rat, was the appropriate year for me, the Fire Pig, to start fresh. And I did. But today, anticipating the approaching Year of the Earth Ox, I start to begin it all again...an activity that will continue for several months.
Posted by baroness radon at 10:24 AM

For the New Year... Uyeda Shoes. Claire knows how to take care of feet, and stocks some shoes with very low ugly quotients. Some even warrant shouts from across the room, "CUTE SHOES!" My apologies to your credit rating and New Year's Resolution track record :)
--laurelle

I'll be tiptoeing..walking...running there soon! Stay tuned, I have some more observations about shoes, having almost finished the book.

you have 32 makeup brushes? i don't even have one! okay i might have one but i haven't used it.

Happy New Year (Chinese and American)!
My husband would have looooved the stocking stuffers, too. I usually get him one or two things from our own local hardware store, too - but your idea is SO much better!
I also have the shoes addiction. :)