Solstice is A'Comin' to Town 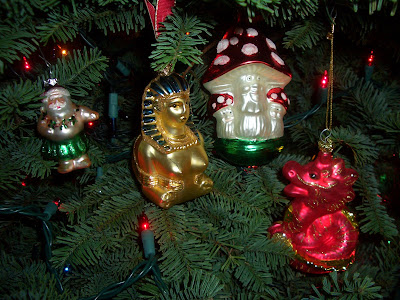 A Hula Santa, a Sphinx (or something Egyptian), Fly Agaric Mushrooms (Gluckspilzen), and a Chinese Dragon...is this sufficiently multi-cultural for a solstice tree? The tree is very important to me, has to be real, and in the past 40 solstices**, I have only missed this tradition twice, for more or less reasonable reasons.
First was when we were moving from Idaho to Pennsylvania at Christmas time: our red and white van, decorated with antlers and a wreath, a Christmas ornament on wheels, broke down in a snowstorm in Iowa. Was it Davenport or Des Moines? Whatever, with an infant and four cats (having jettisoned the tropical house plants that did not survive the night drive through Wyoming), we were traveling back east. We had the van's universal joint replaced on Christmas Day, while the infant charmed everyone, mechanics and diner waitresses; we felt like Mary and Joseph on the way to Egypt.
Second tree-less holiday was a short December sojourn in pre-handover Hong Kong and I couldn't bring myself to pay such an exorbitant price for such a puny tree for so few days. The infant had grown and that year, his 16th, experienced his first serious hangover: he got terribly drunk on Christmas Eve with some graduate students in the residence hall where we were staying at HKU. It was the first Christmas morning he was not up at dawn. Later, we gave him cash and he went off on his own to Kowloon to bargain, quite well really, for a fancy Japanese boom box. No tree, but it was a memorable holiday.
This year's tree, the usual imported-from-Oregon Noble fir (they hold up well) will probably be around until Jan. 29, Chinese New Year. We got a good deal this year: the tree importer got a big discount from the shipper, Matson, and in a spirit of good will and aloha, passed it directly on to the buyers. That's why we always go back to the same vendor.
It's funny buying a Christmas tree in Hawaii. Solstice here isn't quite the same; mostly just rainy and cooler weather. But I need that smell and the feel of the needles to remind me of tramping around in the snow in the Christmas tree lots with my Dad in search of a tree just the right size to fit on the "platform" for the model train. If that resonates with you, be sure to watch Polar Express this year, the best new Christmas classic.
**That is, the solstices celebrated as independent from natal family: we are celebrating our 40th wedding anniversary on this very auspicious date. Longest night of the year. Yang rising big time. Cool huh?
Posted by baroness radon at 4:51 PM