Thanksgiving and the birthday came and went and have set the stage for the approaching solstice. The turkey holiday was spent on the Big Island of Hawaii where I did a masterful 20-pound bird for four people. (It was the smallest dose of tryptophan available.) Had so much we brought some home: I am still eating it. We especially enjoyed the pond in front of the house we rented. Not only could we swim in the deceptively deep, clear, 91-degree pond which we shared with fish, crabs and tiny shrimp, but it provided beautiful meditative reflections for contemplation. 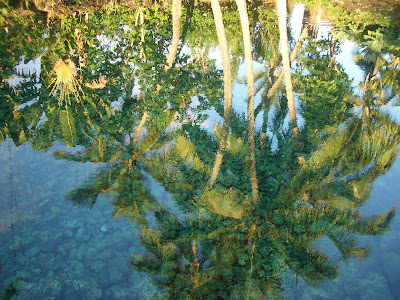 The whole area was networked with a series of geothermally heated pools which were clear and only slightly salty...brackish sounds yucky, but that's what they were. They were sensitive to the tides. The rocky bottoms were hypnotic. 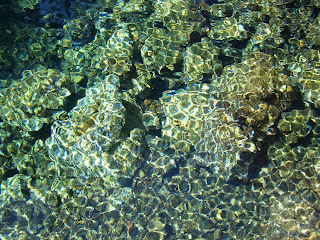 We were about 30 miles from the ill-fated Kalapana Black Sand Beach and some subdivisions that were destroyed some years ago (1990) when Kilauea restarted its relentless effort to expand the land mass of Southeast Hawaii. In fact, there is a new island forming in the chain, although I will never see it. It is giving geologists and oceanographers a wonderful opportunity to observe the earth as it develops. It's alive: it's not done yet. We went to visit the area and though we couldn't get close enough to see the lava flowing, we did see the evidence of activity. Great steam clouds form where the lava is pouring into the ocean. 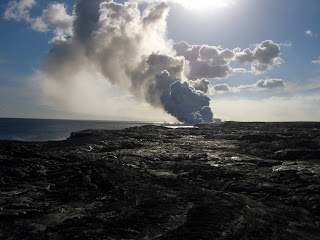 And it doesn't take long for things to start to grow in the cooled lava. 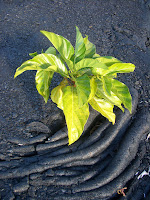 Here's a noni plant, a Hawaiian medicinal, taking root in the natural asphalt.
We got a lot of frozen turkey past TSA to carry back home to Oahu on the return 45-minute leg of our $543 flight on the pesky little upstart that is held partly responsible for the failure of one of our original island airlines. This airline actually wants to buy the name "Aloha," the 60-year-old brand that is no more. Just one more thing happening that makes me question the conscience of business. Seems to me it's one thing to buy another business, but quite another to buy the name of the business you helped kill.
My Christmas cactus began to bloom on my birthday, another one of those cosmic calendar occurrences.
Later in the week, I went with a friend to hear Ledward Kaapana, a world-class, Grammy-nominated Hawaiian slack-key guitarist who happened to be playing in a coffee shop in Wahiawa, which is a stone's throw from Kolekole pass, through which the first Mitsubishis arrived in Hawaii 67 years ago today. (Now you see their descendants parked, and not necessarily driven by Japanese tourists, at Pearl Harbor Arizona Memorial.)
So, I gathered with the Led Heads to hear this unassuming guitar hero of Hawaii, who celebrated his own 60th birthday in September, playing for a group of about 40 people, including family, friends and fellow musicians. Home from mainland touring, he performs for FREE for friends, and also graciously showcases young talent and proteges. What a thrill it must be for a 13-year-old guitarist or a young singer to perform along with Led. In 1983, when I arrived in Hawaii, I bought one of his first albums after hearing it on the great speakers at the now-defunct Tower Records on Keeaumoku Street. It became a favorite in my slack-key guitar collection as I became a Led Head. I saw Led last when he opened for Bob Dylan about ten years ago in Honolulu. As an afterthought this week, I took the old vinyl album along to the coffee shop and asked him to autograph it. "It must be really old," he said. "Happy Birthday," he wrote, "Jus' press, Ledward Kaapana." Led grew up on the Big Island, not far from the picture up above, in modest means, without electricity, but with a lot of aloha and support. They say his nimble fingers can play anything with strings, and I am proud to have had them inscribe the album for me. I'm not big into celebrity artifacts, but this one is special.
Though we all live scattered about on these tiny islands --Oahu, Maui, Lantau, Cheung Chau, Manhattan, the British Isles -- on Earth (not even the Big Island of the solar system) -- none of us need be isolated because we have music from big hearts like Led, and the internet, so you too can enjoy some of that warm geothermal energy from the Big Island.
Posted by baroness radon at 8:53 AM

That is flipping gorgeous. I am so, so jealous!!!!

i have a subscription to emusic, and the "GrandMaster Slack Key Guitar" album is now queued for download. sweeeet. :)

that reflection picture is GORGEOUS.