Is there anything more metaphorical, romantic, or mysterious than trains?  I come from a family with a history in trains ("The Pennsy"--the PRR, the great Pennsylvania Railroad, now absorbed by AMTRAK). Great-great-uncle Hiram on Mom's side was a railroad man,  as was my grandfather on Dad's side.  My father recalled taking the train as a child to visit relatives 75 miles up north of the town I grew up in, which during the industrial 20th century was a major center of rail commerce and locomotive building and maintenance.   But I'd never taken a train anywhere until I was in my 30s, and then because it was convenient to get back and forth from Pittsburgh to Philadelphia.  They were trips I took because I didn't have a car: the bus was creepy and boring and uncomfortable, and flying was too expensive.  But the train--what a relaxing and economical way to travel.  Have a beer and watch the world go by, sort of slowly, really, while basking in that comforting confidence that the train knows where it's going, you don't have to do anything.  I took the train about 10 years ago from Philadelphia to Altoona, while re-reading "Brave New World,"  a once futuristic and slightly lascivious book that now seems as quaint as riding a train.  I finally got to observe the "World Famous Horseshoe Curve" from the Curve itself.  When I was a child, we used to visit the Curve on family Sunday drives; it was supposedly an engineering marvel and a kind of shrine for railroad families. I used to irk my father by asking if they knew about the World Famous Curve in Pakistan. (They probably did, India and Pakistan being train-dependent countries.)  There was a point on the curve around the mountainside where the locomotive and the caboose would be just a few feet from each other if the train was long enough.  It's a pretty cool thing to experience, like being in a model train layout (another icon of railroaders, to be found under every Christmas tree).
For a recent gathering of family and friends for a wedding in Palm

Springs, California, I was nostalgic when I got RT tickets for my son and his SO on the Coast Starlight, a train that runs down the west coast, from Seattle to LA.  I was vicariously anticipating the romantic 30-hour each way North-by-Northwest journey, with sleeper cabin and dining car, indulging in ancestor worship and thinking of trains in China.  My son took a fabulous photo from the train which I don't think he will mind my sharing here.
This image  seemed so Chinese to me, the beautiful cranes observed from a train, and made me think about my China train travel experiences.  (One in particular, a wonderful moment 20 years ago in the Chinese countryside when the Wizard was able to use, quite clearly in Mandarin, a phrase he had learned by rote: "Why is the train not coming?")
Here in Hawaii, we are having a major political "discussion" about rail, because we need alternate transportation really bad.  In terms of both destination and placement, the crux of the issue is "Where will it go?"  As if there will be one single long track that goes from here to there and solves everyone's problems.  In Hong Kong, and Greater China, EVERYONE can get ANYWHERE because the trains go EVERYWHERE.  Under harbors, through mountains, across deserts, below cities like mole tunnels.  And routes are added constantly, like the controversial train to Tibet, and new lines all the time in Hong Kong, which challenge the whole infrastructure to update fares, route maps, stations, all of which can be accessed with a convenient debit card system.  It makes the Horseshoe Curve seem really primitive.
This September, traveling from Xian to Wudang, literally THROUGH the series of mountains I had just two days before flown over, I was struck with the metaphor of train travel, the way we would be cruising through a long dark tunnel to burst out for a few seconds to glimpse a dreamy bright image of  landscape in a valley with houses, laundry hanging out, a truck crawling along a dirt road, peasants tending a field, construction of a bridge, then suddenly back in the tunnel for a few more minutes until another glimpse, a crazy slide show that went on for hours. It was a metaphor for daily living, as we move through our workweek, with glimpses, flashes of insights as we go in and out of the tunnel.  The metaphor of the train is so pervasive in modern literature, like that story of the train to hell we all had to read in high-school German class, and train references in blues songs. The train carries messages about love and death, destiny and fate.  Standing next to a waiting train, you feel it vibrating,  pulsing, breathing like an indifferent animal.  In the great new Christmas classic movie, Polar Express, (which must be loved by anyone of a certain age who ever had a model train layout under their Christmas tree) the train is like the Tao.  Just get on.  Go visit the relatives. Watch the world pass by.
The Slow Train from Xian to Wudang 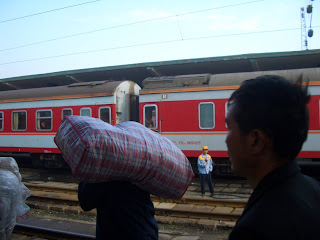 Hear hear!
I can't live without trains. My favourite train journey is probably Hong Kong to the border of ... Kyrgystan? One of the -stans, via Urumqi.
I will link to your blog even if all you ever write from now on is crap. Well it can't be because: You love trains!

I'll try not to disappoint! I took the train from HK to Guangzhou a few years ago. It was great. Incidentally, that guy in the train picture you can't see so well was major China Drool!