Regrettably and reluctantly, I have enabled the spam-blocking word verification option on both Tao 61s. It's become too humbug to keep deleting the amusing but annoying and irrelevant comments in--and by--Chinese characters.
It seems the verification program uses the same technique as naming pharmaceuticals, to come up with "words" like SYCHI, PILEEZ, TYPERACK, CHOMYT and JUTSY, not far from ONGLYZA, a new diabetes drug I just heard an ad for. (I kinda like "TYPERACK," maybe something to alleviate smoker's cough suffered by writers.) 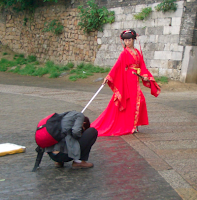 In this action, I am visualizing myself as the elegant swordswoman I saw in May in Suzhou, taking down a hacker by the city wall. Less cyber than saber defense. Actually, this woman was being photographed with a young man, we thought for wedding photos, possibly for advertising. The "hacker" was doing a light-reading on the wet stones.
I asked my guide, "Is she pretty?"
"Only with makeup," she replied, with a little disdain. Well, I thought the sword added an edgy quality to her look. I'd like to arrive at a business meeting done up like this.
Her companion, my guide said, was also unattractive; too short and eyes too small. I thought he was kinda hot. I hope the paid photographer did not include the row of public porta-squatty-potties I unthinkingly captured in the background. If the photos were bad, I wouldn't want these clients coming after me. 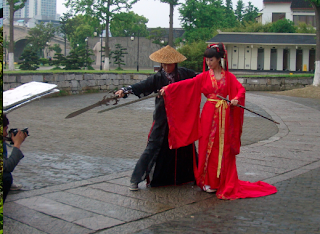 I rather enjoy the word verification system because, as you suggest, it's fun to see what group of letters pops up. Some are downright Freudian!

I'll look into it. In the meantime, please don't link to Chinese spam. Where's my sword....?

Since the label for this post was "blog stupidity," it is apprpriate that I only managed to set word verification on Tao 61/Yin...now I have acomplished it on the Yang side. Thanks to RT for pointing this out!

I don't mind the word verification at all - sometimes it's funny!
Love those photos, though!

Somehow the Chinese spammer got around the word verification..
"We can give each other the best gift is "really care""

Maybe they do really care.