I was just rudely awakened from my delightful Sunday afternoon nap, which began while reading of someone's troubles during the Cultural Revolution in Urumchi, by a (recorded) phone call from Charles Djou's wife, presumably a member of Team Djou, trying to refute terrible things people have been saying about her husband. The least of which are references to his weird name, which in old-hundred-names Pinyin should be Zhou.
This weekend the land-line has been ringing every half-hour with annoying calls from political vote-seekers, like Hawaii is really important. Well, actually it is. At least to itself. Mr. Zhou has been promised a seat on the House Appropriations Committee should he win the seat vacated by Neil Abercrombie, former Congressman and Faculty Senate member at University of Hawaii (where he was a sociologist earning a degree in American Studies), to run for governor against "Duke" Aiona, the current lieutenant governor, who has assured us he is half-Chinese. Which may mean something to the Chinese, sinophiles and, possibly, Republicans of the island, not necessarily a majority. The ultra-essential seat in Congress is still held in the Senate by our version of Strom Thurmond or Robert Byrd, the very cool Daniel K. Inouye, first and most important Japanese-American in the Congress, our one-armed Robin Hood, who has been chairman of the senate appropriations committee like forever. The one-armed swordsman theme turns up in both Chinese and Japanese martial arts tales; Abercrombie was the heir-apparent to this sensei until recently. We'll see how Mr. Zhou does in the swordplay appropriations, which are very important to Hawaii.
Politics bore me, and I generally vote for the good-looking guy, in this election, the ones with Chinese genes.
I intended to attend the China Splendor extravaganza today, but I'm too pleasantly housebound to drive in to town to the exhibition center, where I suspect the Zhou/Aiona (the good-looking party) forces are out in full force, begging the votes of the Chinese base. Instead, I have been working on my homework for my recently resumed Chinese brush painting class. After some warm-up bamboo exercise -- painting bamboo (and the rest of the Four Gentlemen) is like doing Eight Brocades -- I decided to attempt an homage to Qi Baishi. It felt like copying Van Gogh's "Starry Night." Looks so easy, but it is impossible to capture the qi...Vincent Van Gogh...Vincent Zhao. How long must one imitate the masters to become one? 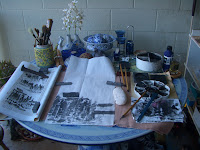 Here's to Qi Baishi
How long will it take for Charles Djou/Zhou to become Daniel Inouye?
Posted by baroness radon at 2:17 PM

I am so freaking sick of all the political ads. They make me stabby.

I am LOVING your new painting!