A Mouse With Nine Lives

Another dead battery morning. A call to my mechanic and a review of his extensive records and every receipt since 1994 indicated that the current genuine Mazda battery had been installed in June 2001. Nine years on one battery. True, the car has no power windows or air conditioning or anything (not even a radio for the past two) that puts a strain on the electrical system, but still, that must be some kind of record. 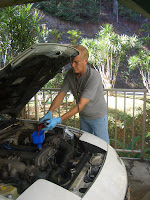 p with a happy roar. My mechanic, who would have been a great dentist or doctor (always wears rubber gloves when he's under the hood) chastised my ongoing failure to check the oil weekly. (I do floss regularly although probably haven't been watching cholesterol diligently.) It was down two quarts. It only holds three and a half. Some Mystery Oil to calm ticking valves, a check on fluids and voltage, and I'm back on the road again.
More committed to follow-up than my doctor, he called back later to ask about the valve noise. (I knew it was him; I have assigned "Start Me Up" as his personalized ringtone on my phone).

"Sounds great!" I assured him.

"Good, because as I was reviewing the records, I see it's timing belt replacement time. Do you want to budget that soon?"

Well, not really. At least my dentist, with whom I have been spending some serious restorative time recently (it would be much worse if I didn't floss) considers my dental insurance before proceeding. (Apparently I have sufficient benefits from three plans to restore two fillings, way more than nine years old, and possibly a crown, before the end of the year.)

Wish I had similar benefits for mouse car maintenance.
Posted by baroness radon at 3:25 PM

I am still carless (thanks to the lady who wrecked my car) but hope to have mine back soon!
Glad to hear your car is revving up nicely again!

Careless and Carless are the same, but for an "E". Entropy at work?
Two quarts down out of three and a half is more than Careless enough to render most drivers Carless.
The Miasma simply isn't ready for oblivion :)
Nine years from a battery is good, but not so rare. I wonder if the electrolyte levels were down like the oil was?
That would do it.

@Crow-- The battery was a sealed one, so couldn't have checked those levels. And I am routinely chastised about oil. And there's something in the word "entropy" that suggests Polynesian paralysis..."entropic"...

And you're right...TAO 61 is not yet ready for oblivion, or enlightenment.