I'm wondering...is it because I was watching CNN at 3 a.m. Friday, yesterday, in anticipation of the faint ripple of a tsunami that panicked Hawaii for a few hours, creating a school holiday and not much else. Is that why, as I am reviewing images of the devastation and ongoing threats of horrible destruction on Honshu in Japan (that recall images of Hiroshima and Nagasaki), all I can do is alternate wiping my eyes with exclamations of "Holy shit!" and "OMG." A week after my little sake and shochu adventure, and days after my Ash Wednesday observance, reality bites. Ashes to ashes, dust to dust. Going with the flow?
When warning sirens went off around here at 10 p.m. Thursday, I turned off my wuxia drama to see what was going on. I'd heard about the Japan quake (and one in China too, on the Yunnan-Myanmar border) earlier, and paid attention to the warning. We are not in an inundation zone, so I just made a note to be alert at 3 a.m. when wave effects were expected. Titillated by the tidal surge in Japan, Hawaii people were out lining up for hours to buy gas and water and groceries just in case (even though we live in a hurricane prone zone and are constantly reminded to BE PREPARED with water, food, batteries, and first aid supplies). The Wizard was up monitoring the situation -- he had a responsibility to his organization -- but I just watched (rubbernecked). Observing the paltry local ripples on TV for a while, I went back to sleep, glad I was not a newsman interviewing a disaster specialist in the wee hours.
Which was was mildly entertaining. A geophysicist with the Tsunami Warning Center who was answering questions for the media kept going in and out of the building (which happens to be well within the inundation zone). At one point, looking jazzed on caffeine, finding some meaning in his life in the kind of excitement his profession studies but doesn't really want to see, he said, "I come back out here to talk to you because it's crazy in there." He was doing all he could to avoid saying "no problem" for Hawaii--it was up to the governor to finally announce that nothing was happening, and all the schools and clinics had closed for no reason.
The effect on me was just a restless night; the local consequences were all totally unrelated to the actual event. In the morning, our AT&T service was down. The Wizard's iPhone wasn't working and I confirmed that there was no service with my iPad. Probably too many people tweeting. Lesson learned: maintain the landline.
But now, trying to comprehend the devastation in Japan from the tidal surge across land I have flown over, terrain that always looks like a tidy model train layout, is overwhelming. All of the silly discussions and speculations I've been indulging in about politics and spiritual development seem a little trivial. History --or geophysics--repeats itself. And we are still at the mercy of nature, complicated by man's efforts to control it. No one wants to see this: 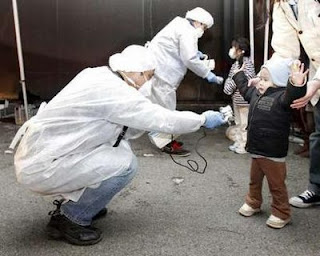 Scanning a Child for Radiation Effects
I would rather be reading Richard Scarry's Cars and Trucks and Things that Go with that child. 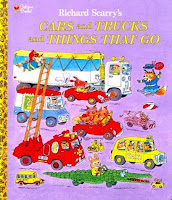 But not with these images, below, truly scary and speaking for themselves, not toybox clutter, and lacking the cute mice and cats and dogs in a world where nuclear reactors don't explode and kids have to be evacuated or pulled from rubble or found by sniffer dogs. 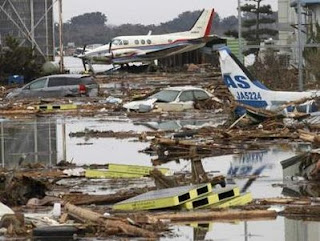 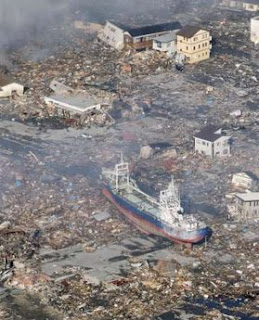 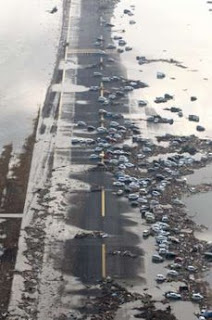 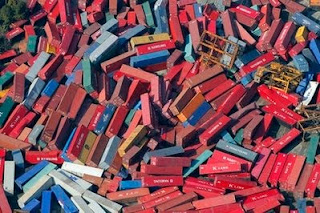 Posted by baroness radon at 6:18 PM

Well, we could say that EVERYTHING in life is trivial or, just the same, NOTHING is trivial. It's like that old Seeger song (made famous by The Byrds), "Turn, Turn Turn."

We could say that, when faced with life and death matters like a tsunami, politics and philosophy don't matter a wit. But they do...even there.

Because of the politics in Japan, they are dealing with their nuclear reactor issues far better than we would over here. That's because they had the political will to install several safety systems that our reactors lack.

Philosophy matters too. If this climatic event is considered to be the actions of an angry god, then a person might show less compassion because it's obvious the Japanese "had it coming."

If, on the other hand, you embrace the philosophy that climatic events such as this are due to the interrelated aspects of climate and the ecosystem, then you would be more apt to exude compassion for the Japanese people.

I simply feel compassion for anyone who has to deal with a situation like that -absolutely horrific. Mother Nature can be a brutal bitch, and she doesn't care what we want or need or like- she just does her thing.
We're only responsible for the humanity of it all.

Hi Neighbor,,
it was very interesting here on Maui I live on the beach in Kihei, so of course I went out to watch the tsunami. The ocean receded out about 400 yards lowering about 3-4 feet then within 2o min. it was about 3 to 4 feet above mean level bringing water onto Kihei road as I stood there! Again ... "lucky we live Hawaii" comes to mind... no big deal but a learning experience to be sure.
I like the photos you posted I had not seen them before good for you for looking deeper into things...
BTW I started a new blog inspired by your concept of yin side/yang side (thank you) here is the address: http://mauitaoist.wordpress.com/

@RT--Clearly I am of the position that "shit happens" and compassion is warranted. And the "extra" involvement of the nuclear problem clarifies the point I was trying to make in the "Dinosaur" post on your blog. (Which may be why I brought up Gamera over on my Yin side, now that I think of it...)

@Cory --Thanks for the local update; I've been waiting for word from my friend in Kihei who is a Civil Defense-trained disaster worker. Maui seems to be more vulnerable than Oahu; that last quake you guys had sent stuff off her shelves, and then there was a flood not too long ago in Kihei, (the Ewa Beach of Maui) right?
I am honored to have "inspired" you in some way. Thanks for reading; I will check out your site and cross-link.

In the meantime, pour a little cup of sake on the ground for Japan.

@RT --My thought that the discussions were "trivial" was probably because I'd just been reading about the "drawing room Taoist talk" ineffective leaders indulged in at the collapse of the Han Dynasty.