In the midst of all the hoopla over the "Supermoon," some of it quite ridiculous, like this thing that was circulating on the net:
the Wizard returned from a business trip to Chuuk (Truk), one of the watery atolls of the Federated States of Micronesia.  I had asked him to bring me a storyboard, a traditional woodcarving on which legends of the islands are depicted.  In some sort of timely irony, the one he gave me is of three guys who want to capture the moon.  They fashion a long pole with tree branches and something like forceps at the end, but are unable to grab the orb.  (The person who sold the storyboard confided that maybe her ancestors weren't very bright.) 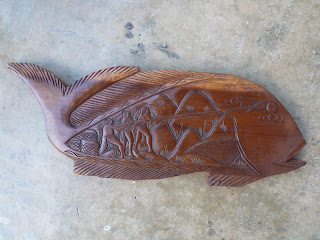 But the legend, which is not too unlike fingers pointing to the moon, was appropriate to the weekend.  I was struggling in the middle of the night with my camera, trying to take some photos of that big bright moon.  I couldn't find my glasses, and I have never quite mastered the wide range of settings and controls for exposure and flash on my little Panasonic.  Still I got some photos of the moon, but of course I never could really capture it.

But I did my best.

Posted by baroness radon at 1:05 PM

I think you got a pretty sweet picture!!
The Age Of Aquarius thing is pretty funny. It says something about my sign (Taurus) but nothing about how this will benefit me greatly. Lame.
:)

Haha, whoever created that first image about the supermoon (most exciting, powerful, and transformative celestial events!) is going to friggin soil himself when he finds out there's a solar eclipse in a couple weeks.

Anyways, it's kind of fun to think of all of us bloggers, and many of my friends, all out looking on the moon at the same night. Maybe at the same time even, who knows.

Kinda like that old kids movie, An American Tail.