Supersize Me a Moon

This weekend was--for lunatics, at least--a big deal:  2012's "supermoon" corresponded (more or less) with other seasonal dates of note including May Day, Lei Day, Cinco de Mayo, Beltane, Vesak (Buddha's Birthday, which according to Wikipedia, actually encompasses the birth, enlightenment and passing away of Gautama Buddha), and several of my friends' birthdays and a wedding anniversary. The rising and setting of this particular moon was full of meaning.

Whether the moment is actually auspicious, I suppose, depends on your own proclivities.  But the lunar display certainly was over the top in my neighborhood.  I was up and down all night watching it; last year's supermoon (in March of 2011) was obscured by dense clouds, as I recall.  Last evening, I caught it rising in the east with my humble little point-and-shoot (which would probably do a better job if I would sit down with the manual and actually practice the settings.) 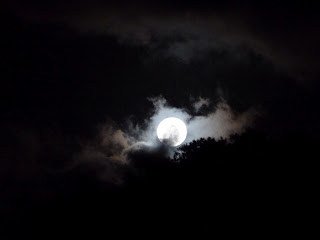 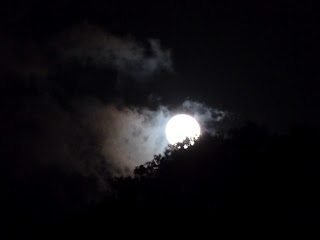 But what comes up in the east, must eventually go down in the west.  After struggling with the camera through the night, I woke about 5:30 a.m. just in time to be able to catch it before it sank below the Waianae Range in the west. 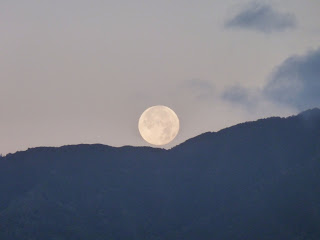 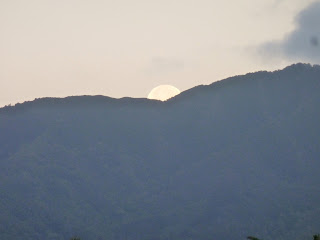 The amazing pearl was gone by about 6 a.m. and I went back to bed too!  And am pleased to note that among the holidays listed for May it is also International No Diet Day!  (Well, in that case, every day is a holiday for me.)  The supersized moon was enough...no fries needed!
Posted by baroness radon at 10:17 AM

Love the early morning shots. Was on the outside section of the upper deck of the ferry from Cheung Chau to Central Saturday evening. Would have loved to have seen the moon but, alas, it was too cloudy! ;(

Oh I know that ferry...once at Christmas time enjoyed watching the phosphorescence in the wake. Very memorable.

As you know I also took a few pictures of the moon rising, but the thought never even crossed my mind to go back out again to watch it set. Yours turned out pretty well for a point and shoot camera. I especially like the morning shots, nice color and detail.