The harvest moon of a few days ago was quite perfect; I did manage to view it at around 3 a.m. as it sailed like a grand glowing pearl against the luminous brocade of a mackerel sky.  I did not have the presence of mind or patience to photograph it, although in the morning I did capture it, along with the near horizon and the industrious spider that has staked out some serious arachnid acreage on my balcony.  That was one of the reasons I didn't gaze too long in the middle of the night.  Where was this tenant?  I'm not fond of spiders, but I am trying to tolerate the efforts of this guy as he maintains a square yard of web.﻿
He has been growing.  I noticed him a couple of weeks ago, just a little speck, but over the course of half a moon, he has increased in size greatly.  I'm not fond of spiders, but as Deng Ming-dao has pointed out, they are the perfect creatures of Tao.

SPIDER
Mind in the center
Radiates to eight legs,
Creating a supreme web

A spider is a perfect creature of Tao. Its body is an elegant
expression of its mind: It spins beautiful threads, and its legs are
exactly suited to create and walk its web. From its center, a spider
radiates its world out with a spare economy.

A spider's posture in regard to Tao is to set up a pattern. Its
mind determines this pattern. It realizes the flow of Tao and does
nothing to interfere with it. It simply creates its pattern and waits
for Tao to bring it sustenance. That which comes to it, it accepts. That
which does not come to it is not its concern.

So I'm trying to tolerate him (or her, who knows).  The last time I actively tried to address my distaste for spiders, I wound up befriending a black widow. But at some point, I think it will be just too much. I am hoping a strong wind will carry him off to the trees or the noisy neighbor's lanai.

A lot of bloggers and FB friends have been posting pictures of spiders lately: tarantulas and dinner-plate sized tree-dwellers of Hong Kong.  This is my contribution to the trend.  Nothing special, but he is interesting to watch; not as sweet as the kolea, but nontheless, nature in action.
On my morning coummute a couple weeks ago, when I still had a radio, I was attracted to the low hanging Chinese-style misty clouds on the mauka side of the freeway.  I once had an idea that I might try painting traditional Chinese ink style of contemporary scenes.  But you know, I don't think the cars and power poles add much to the scene. 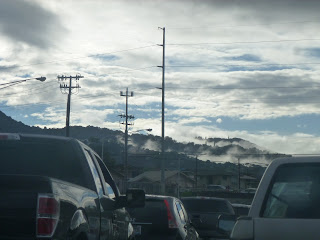 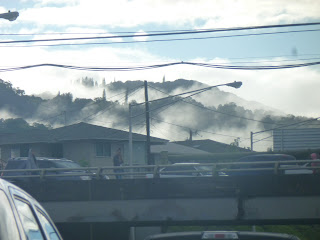 Posted by baroness radon at 4:46 PM

That's an interesting picture, the one with the spider and moon, it reminds me of a UFO descending from the heavens. You know how if a person saw this picture completely removed from the context of this post, and wasn't told what it was, they might be inclined to think the spider was some kind strange paranormal sighting. Just a thought.

I'm someone who has probably been borderline arachnophobic for most of my life, but recently ever since seeing my first tarantula, it's pretty much cured my fear of most smaller, less than a quarter size, spiders (except for the deadly one's of course). They just seem so tiny in comparison, nothing to be afraid of anymore.

The only lingering fear I have, is of inadvertently walking into a large web, and having a spider frantically crawling all over me, or being stuck in my hair, or something. Best not too over think it though, and just make sure you are being cautious and paying attention to your surroundings so that you don't invite disaster. True of all things, not just spiders.

That's probably the biggest concern about sharing a patio with a spider, is that its web may become too big and too close for comfort, increasing the odds that it may crawl onto you. But if it keeps its distance, and doesn't make itself too much at home, then maybe you can co-exist. Otherwise, a nice wind or rain to gently coax the spider out of there would be the perfect blessing, or else you may have to resort to other tactics.

It's an exercise in tolerance. Tarantula therapy! Well, the cane spiders haven't done much to make me feel different about the little guys, but I'm working on it. Watching the web development and maintenance has been interesting though.

I cannot watch the "Shelob" scene in Lord of the Rings...have to cover my eyes. And that old '50s B sci-fi movie, shot in a cave in LA with HUGE spiders... I guess it's a universal aversion.

My husband says the spider is protecting us from mosquitoes.

"My husband says the spider is protecting us from mosquitoes."

I'm with your husband. Whenever I see spiders on hikes here in Hong Kong, I think "oh good, less chance of getting bitten by mozzies!" ;b

I have begun calling the spider "Charlotte"; she is growing rapidly and I expect she will be having eggs or whatever they do. I couldn't find her yesterday, but she is back in the middle of her web this morning.