At least twice today I have received messages about tonight's new moon...one perfectly astronomical announcement on Public Radio about rising and falling and what stars will be visible and the upcoming Orionids meteor shower, but also, courtesy of Deng Ming-dao, more poetically, that "Today is the first day of the ninth lunar month—called the Chrysanthemum Moon—and the beginning of the seventeenth solar term, Cold Dew. The God of the Southern Pole Star (Shouxing), descends to earth for a day. The Double Nine Festival takes place on the ninth day of this month."

I hope he doesn't mind my sharing his commentary that "Tang poet, Bai Juyi (772–846), wrote this poem, "Song of Sunset on the River" for the first three days of this moon. "


The sun sets straight away into the water.
Half the river trembles; half the river turns red.
How we cherish the first three nights of the ninth moon:
the dew like pearls, the moon like a bow.

It seems like I ought to post moon stuff on my Yin blog, but as the new moon is the beginning of a yang increase, moon-wise, I share this here.

Maybe I'll look for that new moon and stars tonight, while sharing the lanai space with my new pet: 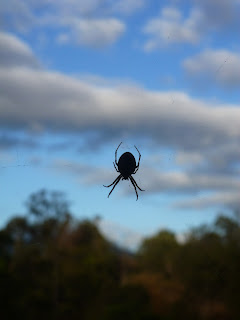 I am caught in a web of intrigue by this creature...Charlotte or Charles...who has been a constant presence for some time now, its well-rigged net securely attached like the cables of a suspension bridge to the fairy lights on my lanai.  It is getting bigger, which suggests to me that it is a Charlotte -- and since it is not a cane spider, big guys who live free of nets and like to invade cars and closets, I am more tolerant.  It seems to know its territory.  And it is very sensitive.  I was observing it closely, patterns on its body, stripes on its legs, and I sighed.  It must have been like a gale force wind; the spider ran to the edge of its web.  Sometimes I don't see it when the sun is bright; it must seek shade among my houseplants.  But then it's back every morning, just waiting for what flys into its web.

If I can figure out the macro settings on my camera, maybe I can get a good closeup.  This has been an exercise in tolerance and overcoming aversion.  I never thought I might miss a spider.  And what a pleasure is a pet that feeds itself, makes no messes, needs no walking, and provides a useful pest-control service.
Posted by baroness radon at 4:55 PM

Your posts are a source of peace and strength.

I read a book by a Chinese lady imprisoned during the Cultural Revolution. A spider in the corner of her cell gave her the will to live.

Kittie, you are so sweet and kind! I know that book. (There's also one called The Spider Eaters.)

I don't always feel that peaceful and strong though.

Incidentally, the weather here has been yucky for the past month...a lot of vog, Kona weather, humidity, rain. But no hurricane!

I lived for awhile in a shack, in Mexico, which had a Black Widow in every corner. The good thing about them was that they never moved from their territory. So you needed only to locate them, and then give them their space.
I had another, that lived under my motorcycle seat. Never moved. Lucky me. I eventually sold the bike, and told the new owner about it, though, just in case. He told me later he had urged it into a jam jar, and put it back in the desert.
My arachnophobia is all but conquered, now, with one notable exception:
Sun Spiders. OMG they give me the screamin' 'abdabs!

Aloha Crow, I thought you had flown afar!
"
I am reluctant to google "sun spiders, but I probably will. This is a work/effort in progress. I really don't like spiders, but I am coming around. As if there is something to come around to. Knowing that the spider thinks nothing of me.

Is arachnophobia some universal human trait?

I don't fear spiders any more, but I can't say I like them much. They seem alien, somehow.
I took a look at images of sun spiders on the net, and I can report it's safe to look at them.
The images lose most of the horror of the real thing. They come in all sizes, and while the huge ones are truly frightening, the smallest ones are the scariest of all on account of how unreasonably, impossibly fast they move.
That such creatures eat scorpions really tells you all you need to know!