﻿
An impromptu Thanksgiving journey, on the heels of my D.C./Portland escapade which included visits with friends and family, has left me a little exhausted, but glad to be alive.  We flew out of HNL on Tuesday night, on a flight that was pushed back several times, leaving us anxious about our tight connection out of Chicago.  Bad enough to have that long haul in cattle class, but our worries were pointless: the connection was delayed five hours.  And when it was finally announced, the gate changed six times.It was like a remake of Airplane.  Thank god for the frequent flyer lounge with its free booze and snacks, civilized and comfortable surroundings and wifi.

Thanksgiving was as it is supposed to be--a lovely meal (the vegetarian Sister-in-Law even cooked a turkey for the rest of us), catching up and laughing by a wood fire, dogs and cats cuddling up with us, and tryptophan helping to overcome (or possibly complicating) jet lag. It was my first time back there in over 20 years (what a lot of gray hair has sprouted).  The fire was essential; it was as cold as I have been in 20 years, too.

The next day I eagerly abandoned the stubborness and exasperation that was abundant while the Wizard attempted yet again to solve the Father-in-Law's issues with Mac file hierarchies and MSW style problems.  The 92-year-old deserves much credit for writing romance/spy novels, but self-publishing paperback-sized volumes (including printing and binding) with a word processor and scanner is a recipe for disaster. Before I could say Pagemaker (which dates me as well as the FIL),  I was on my way 30 miles west to my own hometown, where I thought I might be filially pious in my own way and visit my mother's grave. Despite my aversion to ancestor worship and grave maintenance, it seemed like the thing to so, since it was her birthday and I'd only been there twice before: once when the grave was filled in 1970, and another unpleasantly emotional weepy visit with my father maybe 30 years ago.

To decorate the plot I bought a poinsettia plant (knowing full well it wouldn't survive the night outside) and drove about on a tour of the cemetery. No sexton was on duty, but I expected to remember the landmarks, or that some unknown force would deliver me to the right spot.  Up this road, down that one, past that war memorial and the utility shed...to no avail.  In retrospect, I think I knew exactly where it was, but failed in reluctance to get out of the car and search about. So as cold rain began and the brown leaves from the naked trees began to swirl about, I gave up, decided to take the poinsettia back to the FIL, and took a side road out, through an older section where the headstones were weathered and a bit askew. The area looked like the sleepers had rolled over a few times, leaving the bed disheveled.

But what was this I spied?  There, a  huge marker with my maternal grandmother's family name: a family plot.  But I knew Mom wasn't there.  Still I got out and discovered none other than Hiram, my great-grandfather and his wife Emma.  Hiram was a bit of a legend in the family as a GAR veteran and a longtime locomotive engineer with the Pennsylvania Railroad.  Actually I have in my possession 30 years' worth of railroad passes good for him and his wife after he retired, and his GAR badge.  Very elegant and interesting artifacts.
As I wandered about the area, I also noticed a couple of stones with my mother's maiden name and another of her best girlhood friend.  It was a neighborhood of dead people!  How folks stuck together way back when even after! 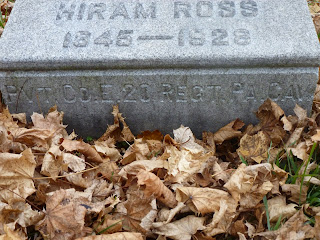 I contemplated Hiram's stone while clearing away the leaves that obscured the inscription that certified him as a Private in Company E of the 20th Regiment in the Pennsylvania Cavalry.  Although I had other proof at home:
﻿
﻿

I was about to leave when I literally stumbled on a small flat headstone at Hiram's feet.  It was my mother's brother, who died a year before she was born. Baby Dean succumbed to some epidemic, as did one of his cousins, same age, at about the same time. It was too late I think for it to have been Spanish flu (to which able-bodied young men were more susceptible anyway), more likely a disease no one gets anymore, like whooping cough or diphtheria. Nobody ever talked about it. 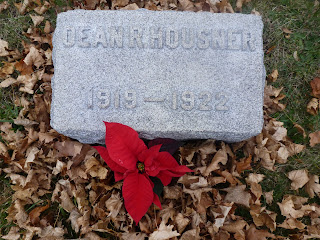 So this was Uncle Dean, whose name my mother had rearranged to use as a nom de plume for some stories and a novel she was working on (but which she insisted my father burn when she was dying). Lot of unpublished writers in this extended family.  I left the poinsettia for this child, for whom no one but me is left to remember anymore anyway, and whom I felt I was directed to find.  I know my mother, her spirit is not in the grave I couldn't find, but Older Baby Brother Dean?  Did Mom send me there?

He would have been my only maternal uncle; Mom was, for all practical purposes, an only child like myself.  Since then I have been imagining what life --particularly mine, in a kind of Wonderful Life way-- might have been like had he lived. If still alive, he would be a year older than the FIL struggling away with Microsoft Word, fantasizing his own memories in romantic spy fiction. Perhaps Uncle Dean would have become a business man, left his fortune to me, his only heir, (assuming he had no children of his own.) Perhaps he would have been killed in the Second World War, becoming another legend like his grandfather at whose feet he now rests.  Or perhaps he would have fathered some cousins to whom I would be no closer than the somewhat estranged (from themselves and myself) cousins I have on my father's side.  Like the Chinese story of Uncle Zhou and his horse, speculation can go both ways...maybe good, maybe  bad.   It's like doing genealogy in hopes of finding illustrious ancestors, more likely very ordinary people, or possibly scoundrels.  That's what my mother found when she did some of that sort of research, probably for her novel.  I am somehow related it turns out (probably through Hiram), to the so-called Robin Hood of Pennsylvania, known in part for having robbed John Jacob Astor's wife (whose portrait I just saw in the Smithsonian American Art Gallery in D.C.).  Legend has it the ancestor hid some treasure in a cave in the Pennsylvania countryside.  We visited state parks when I was a kid, partly in hopes of locating the goods, more likely just to feed the family fantasy (and the novel).

In any case, it's all moot.  When I finally left the cemetery, this caught my attention, winking at me in  a "duh, get real" sort of way. 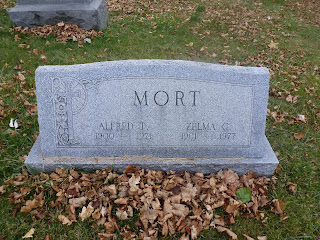 Though not relatives, Alfred and Zelma put an ironic Terry Pratchett-esque twist on the end of my day. I capped it off with a visit to a favorite hot dog stand I used to visit as a kid: "Texas Hot Dogs", a tradition since 1918. Baby Uncle Dean never had one, I suspect, but maybe it could have killed him, eventually. The two-fer chili dogs with grated onion in steamed buns weren't anywhere as good as I remembered. But on the other hand, I am still alive.

Posted by baroness radon at 1:21 PM