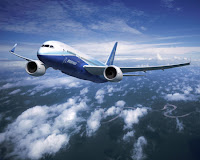 I got kind of weepy this morning when I saw the maiden flight of Boeing's new big old jet airliner, the 787 "Dreamliner," innovatively made of a carbon-titanium composite, essentially  plastic, not aluminum, expected to be more fuel efficient, thus environmentally friendly and cheaper to operate. The hint is the 57 carriers who have already ordered more than 800 of the $150-million planes MAY pass their savings on to consumers...yeah, right, we'll see.  I only hope a little blip turns up in one of my 401(k) accounts -- there must be some Boeing in there somewhere. I am happy of course for the Boeing employees who have jobs building these things.

I was weepy partly because my late mother would have liked to have seen this; she wanted to be a pilot, (romatically inspired by Ameilia Earhart, St. Exupery, and the Spirit of St. Louis) trying to get licensed during the early years of WWII, to ferry trainers around from the Piper plant in Lock Haven near where she grew up.  Her old-school mother, like a feudal tai tai, forbid it. When Grammy discovered what Mom was doing on those afternoons at the airfield, she insisted that Mom either pay rent or move out if she was going to do something so improper as to take flying lessons. (We never much talked about the details of her submission to her mother's wishes. Needless to say, I got away with a lot of impropriety in my fledgling years.) I still have her flight logs, just a few hours short of solo.

I never wanted to actually fly a plane, but I always have enjoyed traveling in them (generally,** prefering a train, really), nose-to-glass in window seats, something that I'm not sure my mother ever actually did as a commercial passenger.  I'm pretty sure my first-ever flight was one she arranged for me in a DC-3, (the Underwood typewriter of aircraft) and through the years I enjoyed bigger and bigger planes, until the ultimate pleasure of the 747, (the airline equivalent of the IBM Correcting Selectric, both pinnacles of late 20th Century technological achievement) usually on cheap Korean Air  flights to Hong Kong. I used to book flights for a petulant Hawaii–D.C. frequent flyer who always insisted on the 747, seat 1A, UPSTAIRS. A plane with a second floor!  Since then,  the 757, the 777, the ubiquitous 737s (short-hop planes, one of which tragically lost its top and a member of the cabin crew on a routine flight around the Islands) but more likely now, I find myself seated on the too-accurately named Airbuses. (Like Dell laptops? I'm carrying this analogy a little far, but the 787 may be a really snazzy MacBook Pro.)  I've always suspected the A in A-300 stands for abominable...a French word.

Boeing always sounds sort of romantic..."big 707 set to go" scans a lot more poetically than "L-1011" or "A-300 Airbus".  And I always assumed the "big old jet airliner" was a 747.  I'm just wondering how Airbus will respond to this new challenge of Boeing's.  Will they devise...a paper airplane? They could recycle it, that's environmentally friendly. And then when  booking our tickets on-line, we could get to choose our equipment: paper or plastic?

**Once I woke up in a 747 with a cold brown liquid dripping on me, apparently from the overhead luggage compartment; it was very disturbing.  Turned out it was coffee from the upstairs coffee maker which had "malfunctioned," as they say.
Posted by baroness radon at 10:41 AM

Aww - I wish your mom could've gotten her license. My mom's artist dreams were dashed, too. Amazing how people can squash dreams with silly notions, huh?
That big ol' jet airliner (totally have Steve Miller in my head) is awesome.

How does a girl like you get to know so much about aircraft anyway?
Ah: The Yang Side...
I am a Spitfire man myself. But never to fly :(
Aerobatics in Chipmunks and sailplanes. Lucky me.
Paper aircraft will never sell.
Who would want to fly in a paper plane???