A concatenation of circumstances has led to the third time in my life I have not had the pleasure of a real Christmas tree with which to mark the season.  And a long one...I usually get my money's worth out of the tree...it has been known to last far beyond the 12 Days of Christmas (12/25 to 1/6), sometimes through to Chinese New Year,  Valentine's Day or Ash Wednesday.  (It's always been gone by Easter; that would be doubling up on sacrifices.)

The shipments of Oregon produce to Hawaii this year were smaller than normal...and some of the containers (they come on container ships) were rejected because they were infested with bugs and slugs, illegal aliens wisely not admissible through Hawaii's agricultural inspection.  I personally would have accepted the vermin (having come to accept the local ubiquitous cockroaches, cane spiders and lizards), but the State is cautious about such things.  Our usual vendor did arrange a last minute shipment of trees, flying in 600, for a line of folks who started queueing at 3 a.m., like fans trying to score rare concert tickets.  The Wizard called me after visiting this vendor to say, "They just announced there are 30 trees left and there are 200 people still in line ahead of me."

"Come home now," I said, "that's potential riot."  It wasn't, Hawaii people being generally patient and orderly, and I am satisfied to know there are some children who have a tree that we didn't buy out from under them.  I do wonder if there were tree scalpers.  I hope not.

The alternative is an artificial tree. My first qigong instructor said that plastic plants fulfill the same feng shui function as real ones, although that may just be disinformation spread by the Hong Kong silk and plastic flower industry.  But a fake, more like furniture or a decoy, doesn't have the sacrificial quality that a real tree does, and I don't want to pay money for another thing to store...it's bad enough to store all the ornaments. 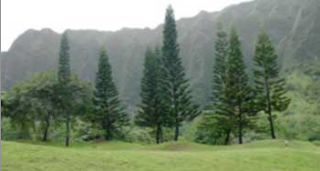 The other alternative is a locally grown Norfolk/Cook pine, above, a tropical evergreen that is lovely to look at, and available as a Christmas tree, but lacks the density of the traditional Northern Hemisphere firs, spruces, pines. (I once had one as a potted houseplant in Appalachia; I would decorate it, but it was second string to the spruce we usually cut ourselves.)  The Christmas tree tradition is after all a Northern European, old religion sort of thing. I expected a big rash of illegal Norfolk pine rustling,  and I may actually scavenge some ironwood branches, below, which have a kind of oriental pine look about them, to do at least some greenery decor. 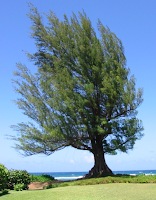 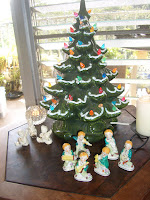 So no tree. We will donate the money we would have spent to our local homeless charity.  And in a sour grapes spirit, I don't have the CHORE of acquiring, decorating, and undecorating, to say nothing of time-consuming visits to the storage locker.  In the meantime, I will be content with the lighted ceramic tree, which reminds me of one my Victorian-esque Aunties had;  the little orchestra is a family heirloom, the figurines are marked on the bottom: "Made in Occupied Japan." 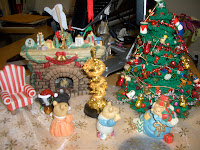 There's also a tiny tree, below, 2.5 inches, smaller than our usual 7-foot Noble fir,  with awestruck mice (the Wizard has a thing for these tiny miniatures), and a clever hand-made crocheted tree, right, bought from a local crafter.  It is on my desk in my office, cozily displayed next to a ceramic fireplace, chair, bag of gifts and, again, some mice, a cat in a Christmas stocking hat, and a Chinese dragon. 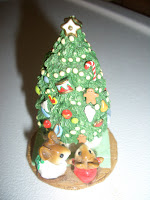 So in lieu of the actual sacrifice, I at least have some tangible references to it. (Sort of like crucifixes, but more cheerful.) And I do have lots of lights on hand, not in the storage locker,  to string all over the place.

In the meantime, while burning scented candles and playing holiday music,  I will offer incense to the memory of the albizias that were pointlessly sacrificed, destroying the view from my lanai and the habitat of a lot of birds.  I know this seems all contradictory and conflicted.  That's the nature of sacrifice.
Posted by baroness radon at 2:35 PM

I think lights on any kind of tree just look pretty. Sorry you couldn't get the real thing, though. We have a fake one, because I am far too lazy to even think about vacuuming needles every single day - much less remembering to water it!