In Tao There is No East or West

...there is no north or south.

Such is the lyric of an old turn-of-the-century (i.e., 19th to 20th)   hymn, in the Episcopal hymnal at least, but of course it was "In CHRIST there is...".  Whatever.  I always liked that old late Buddhist Episcopalian John Fahey's syncopated version. 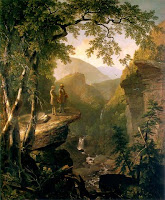 My little ink homage (not quite finished) is hardly worthy, but it made me recall the classic American transcendentalist painting that illustrated something by Thoreau or Emerson or William Cullen Bryant in my middle school English reader (probably yours too). (In my painting, see the little guy under the tree?)  I found it in just minutes, tracking down the "Hudson River School", and was slightly startled to realize it is NOT in black and white (as rendered in that old textbook).

In Tao there is no black or white, either.  The title of the colorful painting is Kindred Spirits. It must have been speaking to me as I painted today.
Posted by baroness radon at 2:10 PM

Well, I like B&W photos, B&W movies and newpapers without color photos. Color sometimes distracts from contrast. I am sometime loathe to tint my ink paintings.

But in the world of optics, the wavelengths doen't really have "color", our eyes, sensors give them that. And in the visible spectrum, there isn't really Black or White (that is presence or absence of color...)

Now we're both thinking too much.

I don't expect life to be black and white at all. Predominantly b & w photos and tv were right before my time, though.

Love your painting! I actually think it would look great upside down, too! (That IS a compliment, in my book, anyway!)