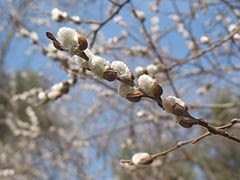 Someone recieved a beautiful birthday bouquet at the office today which included among the orchids and other ornamental blooms, a couple of lovely pussy willow branches.  Lots of ooohs and aahhs. "These are so expensive," someone said, petting one of the fuzzy catkins (oddly, the male part of the flower is known as pussy). 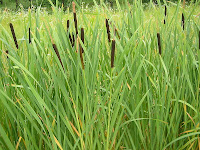 When I grew up on the East Coast they were basically wild, like weeds, a delightful sign of spring but not rare or costly. In my mind they are linked with the equally tactile but more phallic cat tails (right), like grown-up pussy willows, though they are not related.
Contemplating the pussy willows, I recalled a time in the eighth grade, when my English teacher had returned from a trip to Hawaii and had on her desk a vase of anthuriums, "little boy plants," (below right). I was completely awestruck and had to touch them. She came shrieking into the room. "Don't touch those!" 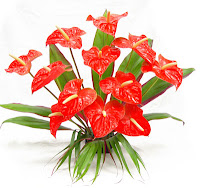 Now I can touch them any time I want; highly valued, but not rare, and not too expensive, at least when bought locally.

Nature doesn't care where it is; only we put an economic value on it, depending on time and place. Just like the "eat locally" movement, maybe when it comes to our flowers and trees, we should "appreciate locally."

Not sure how this post wound up being so very sexually YANG, since I think of flowers and buds as such feminine things.  But, there it is. Maybe a sort of backlash to yesterday's Girl's Day.

Pervert.
:)
Seriously - I didn't know they were or are pricey, either. Huh.
Shows how much I know about flowers. I just like looking at them.

I think it's just pricey when you send the flowers thousands of miles from their origins!

Perverted? You should see the monstera fruits!
http://en.wikipedia.org/wiki/File:Monstera_fruit.JPG