Got calls in the middle of the night and a lot of emails warning us of the potential tsunami expected as a result of the Chilean earthquake. I was deep in sleep after coming home late from La Boheme, where the Wizard, surfing his iPhone between acts, announced that there was an 8.8 quake in Chile.  So the earth continues to adjust itself, I thought. Images of Port au Prince mixed in my dreams with singing Parisian Bohemians in the snow.
Unbeknownst to me, a lot of people apparently were out and about at 3 a.m. stocking up on gasoline, water, rotisserie chickens and vodka.  This morning, the Wizard has been monitoring the radio, which doesn't seem to have much to report except what MIGHT happen.  The last time I saw so much eager news coverage like this, I was witness to the handover of Hong Kong to the Chinese, essentially a non-event. I can only hope this is the same.  And now, with CNN on, it reminds me of watching Hurricane Jeanne coverage with my father in Ocala...until the power went out..for four days.  Not a non-event.
We don't live at sea level,  although a lot of recent O'ahu development has been in the Ewa plain, former cane fields where no one in their right mind would have wanted to build a house, but now the last available space for exploitation. It IS at sea level, a broad flat expanse that begs for a wash of ocean now and then.
Hyped up with fantasy movies of huge comet- and meteor-generated tsunamis ...and of course memories of the real devastation of the 2004 Indian Ocean event, everyone called to let us know "It's coming your way."   When you are at the center of things, and nothing is  happening though, it is hard (for me, at least, not a very OCD person) to get too excited...just amused.  One does all one can...and waits.  Still it seems like the rest of the world is salivating at the potential: 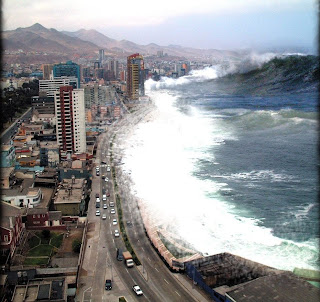 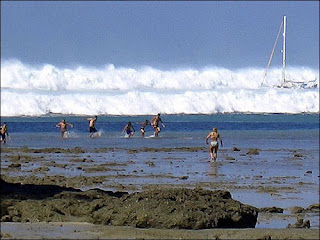 But so far, at noon, not much to report.  Got to go watch CNN!  Hope the power stays on.

EPILOGUE at 1 p.m.:
My initial impulse in this post was to title it "Ignoring the Wave," but that seemed like inviting disaster. But it would have been more appropriate!  Still, better safe than sorry. For a little local flavor of the panic, look at this.
Posted by baroness radon at 12:09 PM

Two comments. First, I think the gov't is getting "warning happy". In Dec. 2007, they didn't forecast our hurricane-like event, so now, if there's even the slightest indication of wind, we receive these dire warnings. More often than not, it turns out to be a case of "Crying Wolf."

The second observation is that media outlets just love a good disaster. It boosts ratings. So, they fan the flames of a candle and make it sound like a five county forest fire.

Well, I don't know. While on Okinawa, Japan, I experienced tremors that caused increased waves. And, when we lived in Hawii, I visited the site on Hilo where those school children got sucked into a tsunami. And, being from Louisiana, 11 LSU students decided to party in Mississippi and ignore hurricane warnings and got sucked out into the Gulf of Mexico, never to be seen again.

We have had at least two serious tsunamis generated by quakes in the recent past, some terrible hurricanes, and volcanic activity. Shit happens, but I don't think the warnings are unjustified. (And yes, the media love it!)

I think the event in 2004 caught everyone by surprise; don't want to see something like that again.

Of course, we always lock the barn doors after the horses escape.