Intense shooting pains in my arthritic thumb joint in the middle of the night should have alerted me to the deteriorated morning weather conditions: dense sooty gray clouds and hard rain.  Driving to work, I struggled through an intense downpour and then realized it might be better if I switched on the wipers.  This revealed to me a scene of great beauty (compensating for my hand pain).  A featureless opaque oatmeal sky, limited visibility, with silhouetted trees marching to the horizon in increasingly faint inky layers, the seven shades of Chinese ink. Just like a brush painting. I drove down from the plateau where we live (the downlooking view adding to the sense of a Chinese landscape) and the virtual scroll painting continued, albeit with occasional hazy highrises in the distant mist. I once thought I might paint a contemporary version of these scenes, but now it seems so wrong.

Then I remembered: tonight begins my next round of brush painting classes,which should keep me Sinologically jazzed until my planned May trip to the Middle Kingdom. I searched for some flights on line yesterday and concluded that earning miles on my preferred carrier is not worth the cost or the extra time; United likes to take Honolulu folks to LAX or SFO first, before arriving in Shanghai.  (This is not so bizarre as an intinerary I was presented a couple years ago, from HNL to Beijing, a 54-hour flight which featured stops in Amsterdam and Frankfurt. Get a globe, people!)  I will probably go on my usual Asian airline, Korean, which makes the trip pretty efficiently in 13.5 hours (and sometimes on 747s) through Seoul (regrettably, through Incheon and not the funky old Kim Po). So I won't get the miles, but I can save time and a lot of cash.

So driving through the driving rain, I recalled a trip down the Li River more than 15 years ago, a little tour out of Hong Kong to see the fabulous formations in the Guilin countryside.  I may have already blogged this memory, but it came to me so vividly this morning.  We had been drifting along the river in one of the flatbottomed boats, marveling at the beauty of the karst landscape when it started to rain.  Most of the group went below where a perfectly timed lunch was ready. We were neither feeling hungry nor social and decided to stay above, irritating the crew who had to stay on the upper deck with us to make sure we didn't steal the souvenirs on offer (but covered against the rain).  But we all became enchanted with the cruise in the mist; overcoming his frustration on having to accompany the pesky tourists in the rain, one of the crew members tried his English to remark: "It's beautiful, isn't it...just like a Chinese painting." Not unlike below, but mistier. 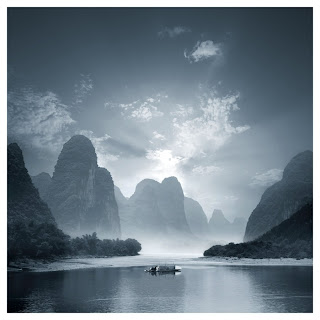 Not My Photo
We returned from the river cruise to a restaurant in Guilin which was memorable not only for the rat runnning around in the overhead light fixture, but for all the paintings decorating the walls, all for sale. I acquired a wall scroll that was better than any photo I could have taken of the scenes. (I had neglected to carry enough film--remember that stuff?).  But the painting is completely accurate, in mood and memory. 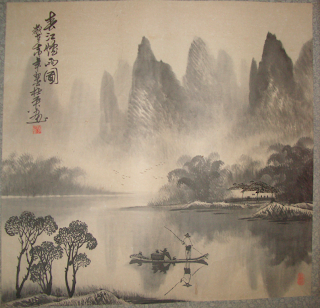 Not My Painting
Posted by baroness radon at 2:10 PM

Powerful! Thanks for stopping by my blog.

Thanks for the link. Kom Kippur is the holiest day for Jews. It's the Day of Atonement. Even secular Jews slam on the brakes for this holy day. Everywhere! From sun-up to sun-down nothing moves in Israel. Very simplisticially, if a person dies on Yom Kippur, he/she has been judged not worthy by God. For Egypt to attack Israel on Yom Kippur sorta went against the unspoken grain in the Middle East to understand each other's high holy days. Israel's Prime Minister, Golda Meir, was slow to react to Egypt's advances because of Yom Kippur's impact. She eventually did...most historians conside the Yom Kippor War a draw, neither side winning a clear-cut victory. Psychologically, tho, the Arabs rejoinced in piercing Israel's armor....