Is it really that time again?  Now, as anyone who knows me knows, I am REALLY a cat person, but I do like dogs.  So as I am poking around on Yahoo news, I discover that it is again Westminster Dog Show time, in just an hour really.  Part of me regards dog breeding* as all that is wrong with humanity -- preoccupation with bloodlines, perfection of physical qualities, fastidious and stylish grooming, competition -- but the dogs are really pretty. I'm not sure they don't know it. 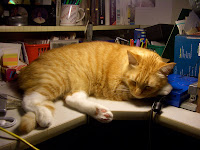 The Yellow Emperor (a 3G** cat) is totally bored with it all, but I always watch, hoping that one day a Basset Hound will win Best of Show. (Not likely. Hounds don't do well.)  Everyone else pays attention to the winter events like the Super Bowl, the Winter Olympics, the Grammys and the Oscars.  But I do like to see these pooches, who look just like last year's and the year's before, parade before judges who clearly see (and feel, how they poke around their jaws, hips, and balls) things I cannot begin to fathom.

The Wizard never grew up with dogs (except for a pathetic Rough Collie named Lad who was really his sister's).  But there were always dogs in and out of my life.  Cocker Spaniels were a rage, I guess, in the '40s and '50s...we had one who was vicious, bit me in my four-year-old tummy while arguing over a slice of bologna; he was relinquished to someone who took him despite the dog peeing on his leg.  Then there was was a Springer Spaniel, a Bushie dog who loved my father, but pretty much ignored everyone else; she was said to be gun shy (and spayed), but that didn't stop her from having a litter of repulsive illegitimate puppies.  I remember my father gently helping deliver those mutts, who later had their tails docked, for what reason I never understood. Posey the Springer was relinquished to someone else for some other reason I never understood.

Then came Funny the Basset, a gift from my father in some sort of apology for chastising me when I pierced my ears.  She arrived on Valentine's Day.  I called her My Funny Valentine.  She stayed with us until my mother was too ill to tolerate a dog; this poor dog was again relinquished to someone who could properly care for her. (I had long since left home and was not in a position to have a dog.)

After Mom died, Dad went through a series of tiny dogs, Toy Poodles and Pomeranians, (much like his own mother's Schnauzers and Terriers) who must have reminded him of the dog in his youth who fell off a bridge to be run over by a train.  He later actually ran over one of his own poodles, leashed to his camper -- oh, this is too sad -- and dragged off before he realized she had not been releashed, so to speak.

The Wizard and I had a Collie cross for a while, when our son was little and we lived in the country, a dog who "came with" a rural house we bought. ("If you don't want him, we'll shoot him," the former owners said.)  Eleven years old, he had a life of his own, and frequently raided neighbors' trash and garbage, until he finally succumbed to a gunshot wound through his tail.  Poor beast had a crooked lower jaw as a result of an altercation with a coal truck and had lived on morphine for a few months.  He was a good dog, but more wolf than lap pet.

Since then (and before, the wolfish collie got along quite well with our **first generation of cats), all our housepets have been felines, except for a few birds who always insisted on flying away. Cats are easy, I think.  They demand little (except food), share your bed if you let them.  All you have to do is litter box duty. It doesn't matter if they're black or white. A friend is having some difficulties with a cat who likes to poop on her feet.  Having a pet is all about the poop.  You either follow your beast on a string with a plastic bag, or scoop it out of a smelly sandbox into a plastic bag. Or change the paper in the bottom of the cage. (To be sure, scoopable cat litter ranks up there with the iPod and the dishwasher, among the great technological advances of the 20th century.) Still, I worry about landfills filled with plastic bags of dog and cat excrement and newsprint covered in birdshit.

What does this say about us?  Egyptians mummified their cats.  We preserve their poop in plastic?

*If anyone out there wants to suggest that I watch Best of Show...I have.  It's hilarious. (I just love that Bloodhound.)


**We have had three generations of cats: 1) Gollum and her three kittens (Gimli, Pippin and Tom) , plus the wayward Paddy Jo; 2) Mao Da Lao, Mao Xiao Xin and Mao O'Wau; and now,  3)  Fifi and The Yellow Emperor  (aka, Lao Hu).  Somewhere between Posey and Funny, the dogs, as a child I had a totally white tomcat named Laska, who came to us at the same time Alaska became a state.  Laska was not impressed with Funny.
Posted by baroness radon at 3:47 PM

My daughter wants a dog so, so badly, and honestly - I do, too. We just don't have the yard for it. However, we might move and that woulod be the big treat. When I was a kid, we had a Welsh Springer Spaniel (best dog ever) and a boxer (also a great dog). If we ever got one, I'd pick one of those two breeds, for sure.