I was thinking yesterday, it's been about two years ago since I started these blogs (the yin and the yang; if you're a yang reader, please also visit the yin one) --and lo and behold, I note the first post here was March 15, 2008.  I don't do this every day (I don't do much of anything every day except get up in the morning and go to bed at night), but I'm surprised that I have sustained this for nearly 100 posts on this side, complemented by another 83 yin rants.  I've learned some things about how my mind works, have exercised my writing a bit, and have made a few blog-o-pals in the process: thanks everyone for reading, and especially for leaving comments -- we thrive on that. 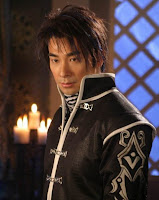 But what is more surprising to me is how the blogs have acquired personalities of their own.  My yin blog, where I rant about assualts on trees, seems to be turning into a site for reviewing Chinese kung fu film  and tracking my obsession with Vincent Zhao, which has occasionally spilled over on this side. (Ooops, there he is.) Here, the yang me has made soup, revisited China, and observed the cycles of the seasons for two years...and they are coming around again.  What new can I say? The kolea (about whom I am obsessed as much as Vincent) are beginning to plump up and become more vivid as they prepare for their Alaskan summer;  like me, thinking about packing for another visit to China in a few weeks.  (Did I just say I am becoming plump and vivid?)

And the Christmas cactus are blooming again. 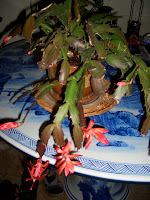 Highlighting the observation that my own history repeats itself, was the appearance of a poem by the great W.S. Merwin, "A Message to Po Chu-i" (the Tang Dynasty poet Bo or Bai Juyi in Pinyin) in the New Yorker recently.  Merwin, another native East Coaster, lives in Hawaii, something I didn't know until just now. I had a previous poem of his, "A Letter to Su T'ung Po" (aka Su Dongpo or Su Shi --I'd use a different name too, he's not Japanese--of the so appropriately named Song Dynasty) tucked in my anthology of Chinese poetry at the page where his original reference appears. Merwin seems to find poetic continuity in the old sages.

So not strange that I find inspiration for my own brush painting attempts (legitimately and properly copied in the honorable Chinese fashion) from the Ming Dynasty.

My teacher liked this one, even better than the Ming original, which however features poetic calligraphy, something I am not, nor will ever be, ready to do.   Or she was just being polite, but she did say I should put my name on it, perhaps so as not to confuse it with the Shen Jhou original which hangs in the Palace Museum in Beijing.  Maybe in May, I will take it with me and show them how it ought to be done!  Since Chinese paintings and poems just go together, I could write "A Letter to Su T'ung Po" on it. 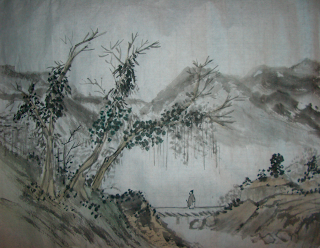 My Journey to the West
I suppose I was inspired to do this not only by my rapidly firming-up trip plans, but by views from my lanai, where I sometimes feel I am looking at a living brush painting. Click on this image and you'll see what I mean: 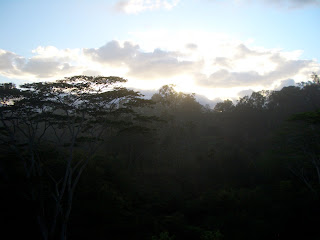 But nothing stays the same...the sky clears, making way for some other kind of inspiration.  I'll find out what it is tomorrow. In the meantime, if you didn't go read those poems linked above, do it now.  They're beautiful.

And despite the blog date of March 17, St. Patrick's Day, it is still March 16 by my clock.  I think a web-based Daylight Saving Time joke has been played on me.
Posted by baroness radon at 10:29 PM

I'd prepared a cup of tea and sat down to enjoy Blogville. Opened your blog and felt as though two friends had reunited after a long absence. I'm a rather new Follower so enjoyed knowing what had been going on in your blog world, brought up to date, so to speak. Very, very nice! And, yes, your brush painting is beautiful, truly deserves to have your signature. You're a very talented person!

I think when you do things you enjoy, the "talent," such as it may be, just comes out.

I prefer your brush painting over the original one. There's a Japanese version of Shen Zhou's painting at U. of Michigan.
http://www.umma.umich.edu/view/past/2003-china.html

ruesedaine-- Mahalo, and thanks for the link...that's nice piece too, I may have to "emulate" it!