Plans become preparations, then it's time to leave.  The well-nourished and well-dressed kolea are gone; I saw the last one last Friday. I thought they had already left, hadn't seen any for a couple days. Then one last bird, maybe the first one I saw last August, picking through the grass at my parking entrance, seemed to give me a goodbye nod.  Bird migrations are quite mysterious, mystical even. How do they do this?

I was relying on the exodus of the kolea to kick my own travel preparations up a notch, and so they have.  The waxing moon, full tomorrow, may also have helped. Perhaps it has helped the kolea navigate to Alaska. They have already arrived, I think, their 36-hour crossing anticipated by someone on the other end, saying "They're back!" just as I am saying "They're gone."  Arrival and departure, a very Tao thing.

And so today I go to pick up my visa-stamped passport, the first of the last of a few steps before I make my own flight in less than two weeks.  The kolea have a compelling vision of Alaska, I suppose; my vision is the Bund in Shanghai, the gardens in Hangzhou and Suzhou, the mountains of Wudang, and the imperial treasures in Beijing.

But especially the mountains. 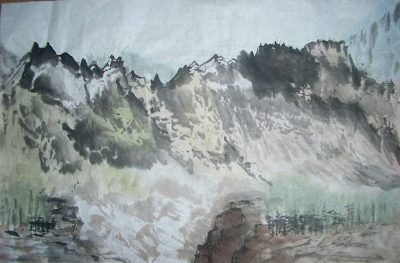 My last painting of the session, after more than a year of brush painting study (a class once a week, and weekend painting exercise) with my teacher, who says I may frame this one. Though her specialty is bird and flower painting, she says I should specialize in landscapes. "Maybe in two years, you paint a flower."  I will resume classes in the fall, but take my brushes with me to China.  I plan to spend some hours at the Summer Palace in Beijing with them.

The mountains in Wudang aren't quite like my vision above. They are dense and green, would appear to be perfect hiding places for yiren or yeren (a Chinese-style bigfoot, yeti or Sasquatch, sightings of which have been reported in the area.)

I am eager to revisit my favorite spot, the area behind the modest Taichang Temple not far from the more famous Nanyan.  It's easy to visualize myself there now.  Espcially because I have photos from 2007 and 2008. 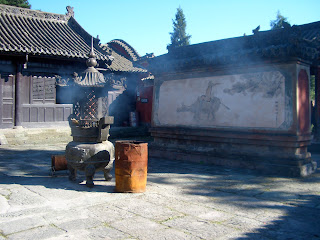 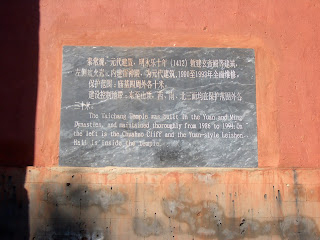 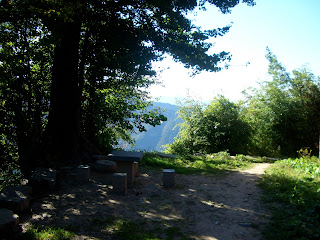 Path to Follow Just Outside and Beyond Taichang Gate
Though I have made barely a babystep in "Opening the Dragon Gate,"perhaps I have done better than I think.  I have meditated on that path above and even now, closing my eyes I am there.  Not with the same skill as Wang Liping, I'm sure, but I have over the years cultivated an ability to "memorize moments,"places where I have been at peace, experiencing wholeness with the environment. (I suppose it would be loss of these memorized moments that makes Alzheimer's so poignant and tragic.)  Oddly, I am loathe to revisit the places of memorized moments of many years ago; too many changes, too much disappointment.  My memories are better.

I did this exercise often when I was young, like imprinting something, as my parents sailed around the Chesapeake.  And later, in my father's final years in Florida, I would visit Shell Mound, memorizing part of a Wildlife Refuge on the Gulf Coast near Cedar Key (hot spot for hurricanes).  I once spent some time  meditating at the spot below. 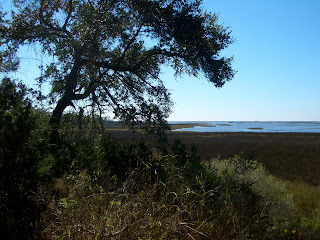 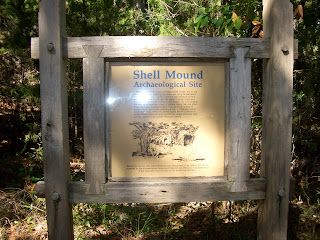 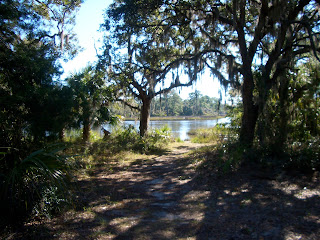 Different Path to Enlightenment
After I meditated, I strolled about the park, listening to insects that sounded exactly like the cicadas in the mountains of Wudang. I asked a park ranger exactly where this "shell mound" was.  I saw nothing like a mound.
"Actually, you're standing on it," he said of the accumulated oyster shells under my feet, left by an earlier indigenous people.  It was their garbage dump.  I can't imagine anyone meditating or enjoying a modern landfill. Some things are meant to be forgotten. If only they could be.
Contemplating my desk globe, I see that Shell Mound is at just about the same latitude as some of the NW Hawaiian Islands, which are just a little below Shanghai and Wudang.  I have many memorized moments hovering around the 30th parallel.
Posted by baroness radon at 12:38 PM

Safest of travel to you, and many more memorized moments, as well!
(Although I do enjoy the pictures! )

Hugs and wishes for a safe trip with many memorized moments. I love how you phrased that...and photos of the paths, yes, very nice.