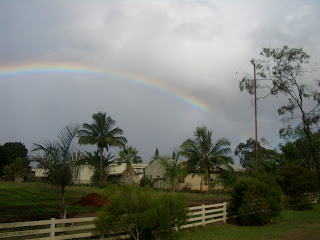 The other half of this perfect arc of a rainbow can be found over on the Yin Side. I actually stopped my car on the freeway Sept. 1 to take this shot, it was such a nice positive thing to see first thing in the morning. Half-and-half pictures because I don't have a wide angle lens on my little Casio Exilim, which for nearly five years has been faithfully doing duty not only for the everyday snapshots like this, but also on travel to the U.S. Mainland and China, at weddings and funerals, the ordination of an RC Bishop and the destruction of a sand mandala by Buddhist monks, recording my teacher's Chinese painting demonstrations and my own feeble efforts. The pocket digital workhorse is looking kind of beat up, but after all this time I am pretty adept with its controls. Only 5.0 megapixels, it seems obsolete, but, like my 20-year-old car, it still goes the distance. It does the one job it was designed for: no phone calls, no internet access, no calendar, just photography.
I only hope to become so adept with my new car radio...will it take four years? After I shot the rainbow, I managed to tune to the local NPR outlet to hear some news, some things to think about.
I learned from someone who runs some kind of "senior" home health care service that 7 out of 10 deaths in the growing population of folks 60+ are ultimately due to falls. I haven't been aware of being in such a demographic since the last time I was thought to be a "senior," the 45th anniversary of which condition is coming up next month. I won't make the high school reunion on the East Coast, but I have been thinking much about those of us on the leading edge of the Big Boom. I was so excited then to be a "senior," ascending the side of the rainbow leading to a wide open future; how quickly we reach the zenith and slide down the other. This melancholy thinking does remind me that I must step up my qigong exercises, one movement of which is called "past the rainbow." Qigong does promote balance, which I can always use more of, and thus, prevent falls.
Next news item was about affordable housing in Kaneohe. The state has spent $60 million on affordable studios and 2-bedroom units to rent to qualifying (poor) folks for ~$365-$865 a month. For perspective, my condo maintenance fee (which seems to be financing deforestation in my "woodland" complex) is just in the middle of that range.
As I was contemplating this, the next item had to do with affordable hotels in Makena, a Maui resort neighborhood adjacent to the ultra-pricey Wailea. The Makena development will feature rooms in the "affordable" $200-250 range, a value, I guess, if you can't pay the $400 to $500 nightly costs in Wailea. Such contrasts. I do hope that the folks in the cheap studios in Kaneohe have better manners than some of the Wailea guests. I have a friend who works in a dress shop there who has on more than one occasion found urine in the trash cans in the fitting rooms. Which just suggests that money doesn't buy decency.
After these curious news reports, I turned the radio off (having learned how to do that) to drive in silence (not counting the Miata's purr), contemplating the sun rising from behind the mauka cloud banks. Later that night, I watched the same sun set off my lanai. It gave me a sense of balance.
Posted by baroness radon at 6:58 AM

And I worked at 2 separate golf clubs, and you would not believe how often people found soiled mens underwear in the bathroom stalls. It was a weekly occurrence!
Older gentlemen, golf, draft beer and heat do not mix, it would seem.
I envy your sunsets!!

I understand about that radio...when I park the Ghia down for winter (Yes! It's New England!) I have to relearn all the buttons in the Spring.
Love the picture. I always complain that you don't share enough pictures. Blah!!
Reunion on the East Coast? Do tell! Even tho' you're not going to make it, my curiosity is up...

There's something absurdly ordinary about the way you write, that makes it both interesting and amusing.
I can't describe it, really.
What I can say is that I always enjoy reading it.
There's an ex-motorcycle-racer I sometimes hear on TV. doing the commentary to races, and he has much the same effect on me.
He sounds like a simpleton backwoods hillbilly with a crazy accent, and the things he says are almost completely pointless.
But I find myself smiling, and listening to every word.
It pleases me: what else can I say?
j'aime ca moi!

As for affordable housing:
What an odd concept.
Try building a house and you will understand something about its value. Even without the value of the land it must occupy.
What is "affordable" anyway?
Does a bum get a free one?
Does a millionaire not qualify for anything costing less than a million?
Nobody has a right to a home.
They don't grow, fully appointed, out of the ground.
Somebody, or many somebodies, must provide them, at enormous expense and depletion of resources.
They are expensive things.
A plastic tarp is "affordable housing".
Saying things like this, where I live, gets me labeled as a Nazi.
Hopefully, that will not happen here :)

My so-called career started many years ago as a reporter for small- to mid-market newspapers which is may be where I acquired the "absurdly ordinary" style. (But I'm no hillbilly, and have a fairly "cultured" accent...the result of living in a lot of different places and some speech therapy as a child.)

I appreciate your attention (mahalo plenny--Hawaiian pidgin for "thanks a lot"), and do not regard you as a Nazi in any way!

When we first moved to Hawaii, and were desperately short on finances, we thought we might have to live in a tent/tarp on the beach. I camped with my parents a lot as a child; I think I might have enjoyed it. We in fact did gather a lot of wild avocados and breadfruit and coconuts then...in a way I miss those days. I love your comments about "affordable" housing.

Urine in the trash can! Gracious!! It has never crossed my mind that anyone would do that. I guess there's no limit to what money can't buy.

I'm mulling over that your condo fee is half what the affordable housing would be in Kaneohe. Seems like there's something out of kilter there.

Crow's comment threw me for a loop. I think you have a fabulous writing voice. Also love how you weave your sentences and their varied construction...and, of course, the circular connectivity always makes me feel that I've learned something and am uplifted by that feeling.

It's funny, this is a post I didn't think would generate much comment at all. Not to worry about Crow, I kind of know where he's coming from. I find the absurdly ordinary quite mysterious. But thank you also for articulating what I try to do. "Circular connectivity" is a taoist kind of thing and I guess part of the point of this post.

I appreciate all of my readers!