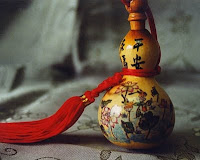 Even CNN has been reporting on the unusual coincidence of the autumnal equinox with a full moon, occurring more or less together at midnight, tonight. A solar balance accented by the full yang moon, about to change into yin, made me think of gourds, hu lu or wu lu, an important image in Chinese, and particularly Taoist symbolism.

It occurred to me today, in light, so to speak, of this astronomical event, how the hu lu symbolizes sun and moon, or earth and heaven in some kind of full balance. Actually, the heaven and earth unification is exactly what the bottle gourd represents in Taoist legend. When the gourd is opened, it is believed, a cloud comes out of the bottle which can trap demons.

I have always been attracted to the icons, which occur all over the place in Chinese art and architecture, long before I understood their place in the mythology. I have a warm memory of being invited into a back room of a cloisonne warehouse in Hong Kong when I asked if there were any of the gourd-shaped vases -- not the most popular tourist items --and found an attractive pair for a good price.
In 2007, just about exactly three years ago, I bought a brass one in Wudang, later to discover at home a completely preserved cicada, a classic symbol of immortality, in it. Maybe all the brass hu lu were cicada tombs, but, in any case when I got home it felt like a quasi-mystical discovery. I replaced the big bug in its urn and later added the sand from a mandala made the following spring by Bhutanese Tibetan Buddhist monks visiting in Honolulu. They had distributed packets of the sand when they ritually destroyed the intricate design. Their sharing of the sand was not a traditional disposition of the mandala material, but I think the monks might have appreciated my application.
On that same visit to Wudang, when I acquired the brass hu lu, a fellow traveler gave me a

small real one that a farmer had given to her; a tiny version of the classic bottle gourd carried by drunken-master types in martial arts and wuxia movies. I still have it. The gourd is actually a symbol of Li- Tie-guai, one of the Eight Taoist Immortals.
A year or so ago, in Honolulu, at a traveling Chinese porcelain sales exhibit, there was a particularly enchanting large hu lu vase I regret having missed purchasing. The proprietors couldn't seem to figure out how much it cost: quoted prices varied from $8,995 to $250 (the good price I missed). It was classic blue and white Ming style, with designs of vines and bats -- a Chinese symbol of good luck, because the word for bat -- fu -- sounds the same as luck --fu. Knowing my disappointment, a friend gave me a similar vase for Christmas, although it had a standard chrysanthemum design, no bats. But not inappropriate for me --the chrysanthemum is the symbol of autumn, and another symbol of long life and duration.
Walking with my friend last May, in Wanfujing, major Beijing shopping district, (perhaps WanFUjing means lucky shopping) I was captivated by this billboard for some Chinese medicine: 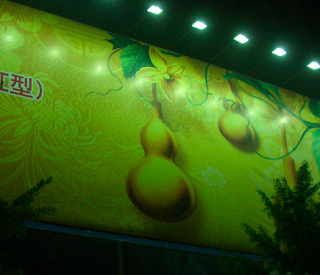 And this design, in the sidewalk around West Lake in Hangzhou, gave me pause during my stroll. 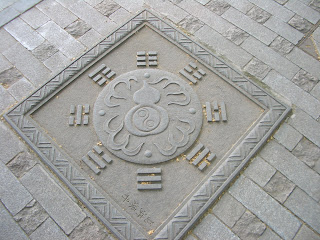 I've always felt lucky, safe and healthy when I find these images.

Posted by baroness radon at 7:48 AM

I always learn such interesting stuff here!
The images are beautiful. I think I'm pretty drawn to a gourd shape, myself.

And I did see the full moon tonight, very special.