I couldn't get anyone, even my Chinese friends, at the last minute, to go with me to the Hawaii Chinese Culture Center's Moon Festival Celebration 2010, which is perhaps just as well. While I loved every minute of this entertaining spectacle, I'm not sure I would have felt right inflicting it on someone who hadn't already intended to go. The Wizard was wise to stay home and nurse his wisdom tooth extraction; the drums from the lion dancing might have been aggravating, especially during the chaotic seating which delayed the start of the show by half an hour and preempted the intermission in the two-hour performance.
As strange as the moon festival I celebrated in Wudang in 2008 (which featured karaoke, 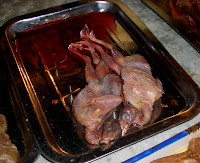 Tibetan dancing and tai chi chuan demos and some very scary street food, (at right) and as flashy as the 5000-years-of-Chinese- history extravaganza in Hangzhou this spring, this Moon Festival had something for everyone, a Chinese Ed Sullivan Show celebrating not only the astronomical but the political as well. First, there was a nod to the 61st anniversary of the PRC (TAO 61 was there!), with cultural attaches from the Chinese Embassy in Los Angeles who process all of our Chinese visas, and emissaries representing the All China Federation of Returned Overseas Chinese (ACFROC, which provided most of entertainment program). Next, not exactly as a conciliation to the PRC, a representative from the campaign of our recent replacement Republican congressman, Charles Djou, (one of the strangest Romanizations of a Chinese name ever), winking to the Chinese, and later, our ultra-attractive Republican Lt. Gov. and candidate for the real thing, "Duke" Aiona, who explained at length his half-Hawaiian-half-Chinese heritage and provided a rather lovely discussion of the meaning of aloha (the giving and receiving aspects of the breath --the "ha" part-- of life, very Taoist really, and not just hi, bye-bye). It's notable that our ranking influential and essential U.S. Senator is Japanese and a Democrat.
After the opening Lion Dance, everyone finally sat down somewhere and the show began...with narration by a strange trio comprising a short personable Chinese pop singer, like a Chinese Buddy Hackett; a striking black woman whose Chinese was actually quite good, if halting, and a very tall blonde in an evening dress which changed from red to yellow midway in the show.
Opening act was a nice tai chi demo with someone playing a guqin over recorded music. Some of the demonstrators had some balance issues, but I really liked the women who did a tai chi sword routine. Got to learn that!
This was followed by a dance routine to "America the Beautiful," which featured, simultaneously, classical Western ballet, a modern dancer, a modern hula, and an ancient hula. All against a huge photographic backdrop of Diamond Head.
After the East-meets-West of tai chi and ballet and hula, ACFROC provided a number of vaguely Las Vegas-styled Chinese dances and vocal perfomances. Yong Liang (Buddy Hackett) did some pop-style Chinese songs which got the audience clapping and singing along. There was a pair of vaudeville-like guys who did ventriloquist routines, a magic act and a shadow play (which included silhouettes of people with background music by Michael Jackson). There was an incredible "rolling lamp" acrobatic performance, a mini-version of something I saw in Shanghai where an impossibly lithe person balances little candelabra on feet, head, hands, and moves around, from stomach, to back, to all sorts of balancing postures. People shouldn't be able to move and twist that way. I should note that in Shanghai the candelabra were actually lit. (Thinking about the contortions makes me want to dip into the Wizard's supply of wisdom tooth pain killers.) There were Mongolian dances and Tibetan dances, although the performers looked all Han Chinese to me. A woman in a Tibetan costume sang two very beautiful songs against a background of mountains...she may indeed have been Tibetan, but I'm not sure. (I'm not convinced the people who presented the elders of our Wudang 2008 tour with white scarves--khatas--at that moon festival were Tibetan either.) The audience at the Hawaii festival was too polite to shout something like "Free Tibet!", if they cared, although everyone was chatting among themselves most of the time, mostly in Cantonese. And my guess is that most of the Mandarin speakers in attendance hail from Taiwan.
This little dose of China (first authentic hit since May), where tonight I was, according to my own estimate, one of four white people in attendance, not counting the two non-Chinese narrators--will get me through to the next cultural event, the expo that kicks off the Hawaii Narcissus Festival set for Oct. 30-31. Last year it was earlier, closer to the Culture Center's Moon Festival. I look forward to another Lion Dance, (check out this "pole dancing") but will try to avoid the demonstrations of "penis qigong," one of the stranger attractions on last year's program. Ed Sullivan would never have scheduled that!
Posted by baroness radon at 10:41 PM

That picture of the... birds (whatever they are) is just gross!!
But how can you pass on "penis qigong,"?!! I'm dying to know what it is!

I'm not sure what kind of fowl they were, long-legged pigeons? We were on a strict vegetarian diet at the time, so it was very disconcerting.

I think if you google "penis qigong" you will find out more than you really want to know.
This site:
http://www.humpjones.com/rear/entry/tu_jin_sheng_undisputed_master_of_penis_qigong_and_iron_crotch/

is about the guy I saw last year. Way too weird. Not sure what that "rear entry" thing is about.

@ Sybil
If the link doesn't work , just look for this guy:
Tu Jin-Sheng.

This will keep you up late at night.

There's a lot of weird shit out there!

There's a lot of weird shit out there!

Actually, the "gross" birds, undergoing frying, look fine to me.
Being a bird myself, I hate to see them dead, like that, but any meat looks much the same, before being carefully disguised, immersed in dye, and plastic shrink-wrapped.
Food is one of those things that gets an emotional response from many.
Beans are every bit as alive, before being crammed into a can.