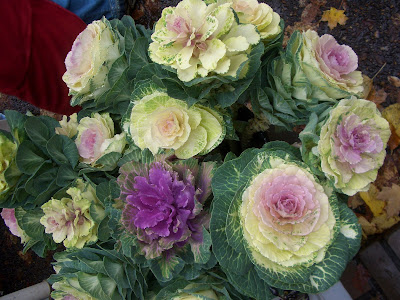 Ornamental Cabbages
Portland, Oregon, Farmer's Market
During a moment of anger and self-doubt (yes, I have my share), I came across a poem in Shambhala Sun, one of the four free magazine subscriptions I got a few months back for filling out a marketing survey. I should say they weren't exactly free--they came with a $2-apiece shipping and handling charge, but still, eight bucks total for a year of Time, Atlantic Monthly, Rolling Stone, and the aformentioned Buddhist review, not a bad deal really.

Shambhala Sun is probably the only subscription renewal I will likely accept...well maybe Atlantic, but it takes so long to read that one, and so much socio-politics.

Anyway, in one of those moments of synchronicity when it seems as if everything in the universe is converging on a particular place in your own mind or brain or skull, whatever, there came this poem that just spoke to just me. Synchronicity is just being open to everything that's all connected anyway. But in moments of stress, it does feel like the universe is talking to you, and you alone.
**********

When they say Don’t I know you?
say no.

When they invite you to the party
remember what parties are like
before answering.
Someone telling you in a loud voice
they once wrote a poem.
Greasy sausage balls on a paper plate.
Then reply.

If they say We should get together
say why?

It’s not that you don’t love them anymore.
You’re trying to remember something
too important to forget.
Trees. The monastery bell at twilight.
Tell them you have a new project.
It will never be finished.

When someone recognizes you in a grocery store
nod briefly and become a cabbage.
When someone you haven’t seen in ten years
appears at the door,
don’t start singing him all your new songs.
You will never catch up.

Walk around feeling like a leaf.
Know you could tumble any second.
Then decide what to do with your time.
**********

Did I mention anger and self-doubt? Well, we all have moments like that, brought on by pressure or its opposite, whatever that is, (what is it? a sucking vacuum?) that undoes the glue of the things that hold our identities together, the things like marriage, career, health. (And no, my marriage is fine, my health is okay, my career...well, another story.)

In an earlier post about change, where I said how nice it would be to just have a reset command for the shuffle of our life, an issue not completely articulated has to do with free will and determinism. One of the big questions that comes up from time to time. In the Philosophy of Mind audio course I'm "taking" during my morning commute, this issue was nicely dealt with: we do have free will, in a deterministic universe. Kind of like my iPod analogy. We can make all those choices moment to moment, reshuffling, but still there is only a limited library of songs, a limited program, to shuffle.

In addition, we observe how our lives are like and unlike others'. We can identify, or not, with the tragic intellectual tortured by the peasant during the Cultural Revolution; we can relate, or not, to Lucia di Lammermoor, first of the suicidal victims in the opera of the same name, with its archaic Romeo and Juliette plot. (Pretty music though; Friday's performance was enjoyable, pre-Verdi, not so energetic and emotional, except for the madness scene.) Pretty extreme examples, but archetypical plots.

But right now, I think I just want to become a cabbage.
Posted by baroness radon at 12:49 PM

hello.. coming by to visit your blog. have a nice day..

Now I really want to have an ornamental cabbage plant (beautiful!) and listen to The Police (Synchronicity II, to be specific).
That poem was awesome. Sounds like me on a regular basis!

I am sorry to sense that you are hurting.

Change is inevitable, not always to our likings. I believe we have the ability to adapt to new situation, human spirit is resilient and can meet new challenges. One door closes. Another door opens. You never know.