I notice a lot of blogs I read have been a little stalled lately, perhaps it is the laziness of hot dog days, or just that summer is busy with travel and leisure. I feel stalled, but have compelled myself to share some observations about my recent travel.
My May China trip was certainly personal, but I mixed a little pleasure with business during a trip to Washington, D.C., a town I haven't visited in decades, and even then it was with grandparents or Girl Scouts. I vaguely remember cherry blossoms and a spitting camel at the Washington Zoo, or that may just be because of photos of me at four with Grammy and Pap. I have more valid memories of the Girl Scout trip, lead partly by my co-troop-leader mother, who made me call her "Mrs." and never paid any more attention to me and my troubles than any of the other Scouts, some of whom "sneaked a boy into their room." (I couldn't get away with that.) We visited our Congressman, and I sliced my big toe open (not in Congress). Mom made me drip blood in the bathroom. "Don't bleed on the hotel carpet!" she advised. "Bleed in the bathroom!"
I measured this recent trip against the recent walkabouts in Beijing. I was in D.C. during the budget debates and heat wave--but you'd never have known the dealing was going on just by walking around, although the heat was obvious and oppressive. I wanted to contrast the capitals, but found more in common than not. Yes, one party versus two, but really, which government gets more or less done. One is impotent, the other reckless; I leave it to you to determine which is which. It's kind of yin/yang. 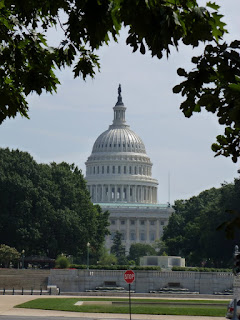 It would appear that Congress has gotten the message. 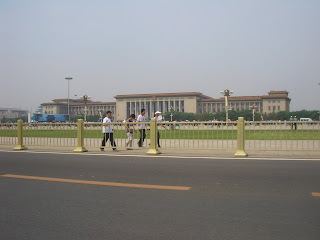 The Great Hall of the People! Walk don't linger. 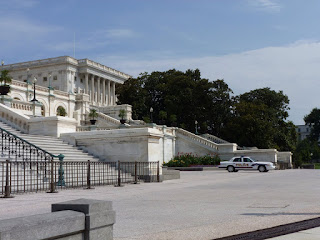 A constant police presence at the Capitol. 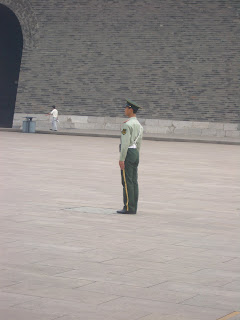 A constant police presence in Tiananmen. But this guy doesn't have the luxury of dougnuts in an air-conditioned squad car while on duty. 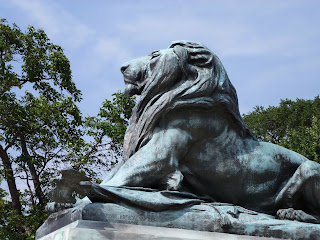 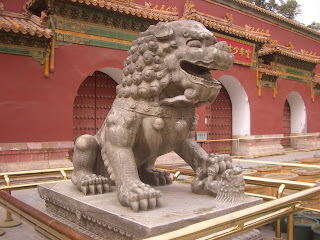 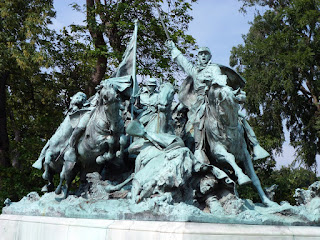 Warriors for the people, justice for all! 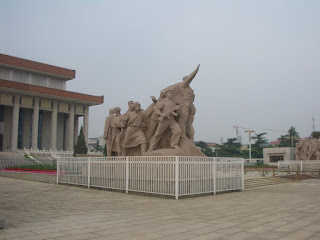 Warriors for the people, but these guys don't have any shade trees.
I left Washington for a brief sojourn in Oregon before returning to the 50th State, which is just about as close to Beijing as it is Washington, at least judging by my air travel time.
More irony to follow in Part 2.
Posted by baroness radon at 2:35 PM

I can't even get started on the government - my head will ache. Stupidity mixed with angry disbelief tends to do that, you know.
Still - I'd rather live in the US. Fo sho. I really need to get coastal.

No matter where you go, there's people and there's government.

And a lot of Chinese would rather live in the US, too. But I wouldn't mind retiring in Hangzhou.

I lived in the US for close to 14 years but am definitely much happier living in a part of China these past four years or so. Of course Hong Kong is different from the rest of China though... ;b

E Gad JieJie - I have barely made it over the State Line while you have been flying all over the world!

@ Xiao Di--I have been fortunate to be able to travel. But even to visit my friend on Maui, 20 minutes away, I still have to take a plane. (Which I will be doing over Labor Day.)

I feel like a Taoist immortal, flying here and there. (But I do spend most of my time in an office job.)

Beijing looks very... stark. Lot of pavement. A bit oppressive. Though that lion was cool. What does it have under its paw?

Yeah, Tiananmen is a lot of pavement, but awesome in its own way. That lion is a female, she has a cub under her paw, a symbol of offspring; male lions have a ball, the symbol of imperial unity. They are usually displayed in pairs, the male on the right , the female on the left, on entering a structure.

How are you doing? I have lost a link to your trip blog.