The actual
Is only actual
In one place
And one time.
Today's reading from Deng Ming Dao's 365 Tao was, as is so often, perfectly synchronous with my experience of the moment, like an I Ching hexagram.

Having reset all my various timepieces and electronic devices to Honolulu time, my body slightly lagging still, I was struck by Deng's comment that "When one listens to a barking dog...actually there is nothing there--just sound from a long and deep corridor, channeled out of nothingness and fading into nothingness again. ... Like that dog, we may all strive, but there is truly nothing to be done.  If we look deeply into our lives, there is only a thin veneer of self-generated meaning over an immense ocean of nothingness." 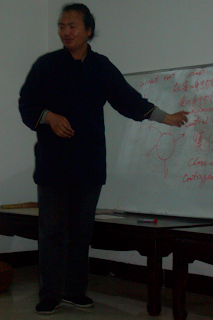 My philosophic mentor of the Tao, right, in Wudangshan would agree, I think; his interpretations of the magic show of life, the mysteries of time and space, were a little surprising to some of my traveling companions (e.g., the butterfly and Chuang Tzu are BOTH dreaming), but they have always echoed my own dog-like attitude toward life (despite my triple fire-pig nature). On my first trip to Wudang, someone remarked that I WAS like a dog...head out the car window, ears flapping in the breeze, eating whatever someone put in my bowl, gamely following the leader on whatever stairs we were climbing, patiently waiting for the schedule to unfold. I was actually flattered. This is a good attitude to cultivate for traveling, especially in a place so challenging to ordinary Western sensibilities as China. And the attitude gives perspective to that "thin veneer of self-generated meaning," otherwise known as this blog. 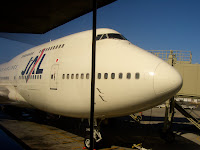 One of two Western passengers on the touri$t-packed 747 (the IBM Selectric of the air) returning me home from Narita, I was  amused by JAL's offering of a small bottle of Hawaii ALOHA Harmony, 100% Pure Deep Sea Water from Kona, a clever idea to make money out of an immense ocean of nothingness. What can be more universally harmonic than water? 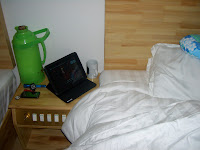 Bottled water is a mainstay in China, a country where even the natives boil the water.  In the mountains, a big sturdy classic Chinese thermos was welcome in the room, keeping water steaming for over 24 hours, ready for tea and toothbrushing. Regrettably, it was replaced after Day 2 with an electric kettle, one of many works-of-improvement in progress in the transforming renovation of the Wudang Kung Fu Ranch and Lychee Nut Farm (where the Wizard told people I was ensconced).  I personally preferred the thermos, filled from a central boiling station, to the annoyance of having to tend a small kettle when I wanted to replenish my green tea jar.

I once again did not hesitate to enjoy a cup of cool natural spring water from the "Thunder God Hole," a little cave up high where Guan Yin presides over the water, supposedly drunk by Lao Tze or Zhang San Feng (Wudangshan's legendary creator of tai chi chuan).

Otherwise in China, I always had a bottle of water attached to my person with a clever carabiner clip, which I highly recommend for such excursions.

One excursion was embarrassing.  When visiting the popular Bee Taoist "hermit," not so hard to find and not so eremitic really, our little group gathered to hear his wisdom translated, which can largely be summed up as "meditate always" and "maintain a loving heart" (ai xin).  As he was patiently responding to some metaphysical question from the group, I had a sinking feeling--literally--the little stool he brought out of his cave for me to sit on collapsed, transforming itself, with the assistance of my big Western butt, into firewood. 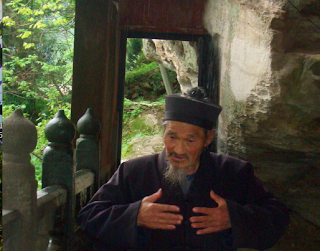 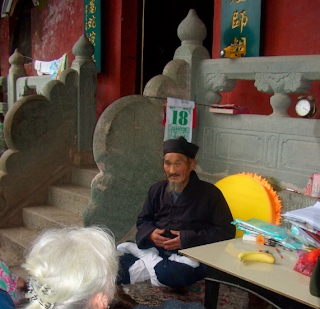 Meditate Always
"Mei wenti (no problem)," he replied merrily to my apologies.  How terrible to break the hermit's chair! Like a flustered Tao-dog, I shook myself and refocused my attention on his wisdom, delivered with a calendar and an old clock in the background.  Later I again informally apologized as we left, "Bu hao yi si." I made some bows at his little altar, and he gave me a warm hug, assuring me once more, "mei wenti." 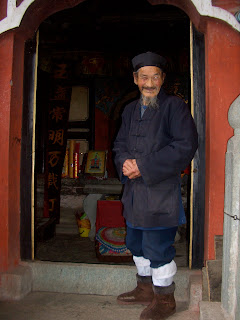 Mei Wenti
I have a feeling he may have appreciated the wu wei appearance of a bit of kindling to boil his own Thunder God water.
Posted by baroness radon at 10:19 AM