For me, actually achieving entry into a foreign country is far easier than deciding what to take there. Nearly packed for my early morning departure, well under the 44-pound bag limit, have remembered toothpaste this time, tucked in with various chargers and power converters, a reasonable if not extravagant assortment of clothing for any occasion, miscellaneous tools, medical supplies, entertainment items, and gifts.  Spare eyeglasses. Pared-down toiletries and cosmetics and bijouterie. Notebook, sketchbook, brushes and ink.  My nifty new iPad is carry-on, along with digital camera, phone, a backup iPod and a nice volume explaining Chinese characters.  (And I mean ideograms.)


My only dilemma (which this isn't really**), not even a weight issue: do I take a video camera?  Had it with me the last time, never used it, but there was one moment I wish I had lugged it along to record a marvelous tai chi demo by a master at Purple Heaven Palace. 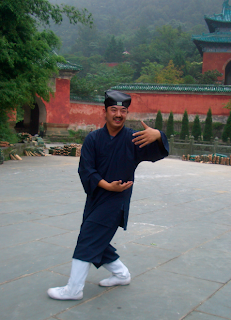 Movement in Stillness (Wudang 2008)
But I also I feel video cameras move you one step away from actually participating in the present moment, making a movie of your own memories, which you didn't really see first hand because you were playing cinematographer.  The digital still camera, for me feels freer, merely like I'm underlining scenes to share and remember, making checkmarks on a document instead of photocopying the whole thing without reading it.
My hesitance may also be because it's just one more piece of technology to master.  Right now, even though I know it's mindlessly simple, I feel like its slave. I need to read the manual. I don't think the decision to take it with me is going to happen until I actually walk out the door tomorrow morning.  It might be interesting if I could videotape my decision making.


**When I was a young girl, I was really eager to go to the circus one year because I had heard there would be "dilemmas."  This seemed exotic to me. I imagined three-ring mysteries, metaphysical high-wire acts, all accomplished by ethereal and spooky clowns. I was enchanted.  And then disappointed to discover that "the llamas" were just part of a parade of zoo animals.
Posted by baroness radon at 4:08 PM

Since I've never been to a foreign land -- save for 2 hrs. in Ciudad Jarez (which looked little different from El Paso) -- I don't think I can offer any keen advice. As long as you have a change of underwear and a toothbrush, sounds to me like you're set! :-D