As the Energy Turns

As usual, a much-needed haircut and the full moon rejuvenate me. Undoing the Christmas tree, which has served  its  peaceful purpose for more than a month, like my haircut, gets all the accumulated stagnant itchy residual energy of 2011 moving forward toward the Year of Dragon (by sweeping away hair clippings and pine needles).  So Sunday I overcame my lethargy to get to the Art Academy for the show of landscape paintings on loan from the Forbidden City.  The exhibit opened two months ago, partly in connection with November's APEC event, but I put it off and off and off until the last moment.  I'm sorry I did that because I would go again and again and again if I could.  But it has inspired me and I'm looking forward to my new painting class with my Chinese teacher starting on the Chinese New Year.

At the Academy I followed the docent tour that really didn't tell me much I didn't already know, and which presented the Yuan-to-Qing works from a very political perspective.  These were no longer Imperial paintings, commissioned by the Emperor, but paintings of the people, by the people, and for the proletariat.  I suspect this angle was imposed by Beijing, reluctant at first to lend 150 valuable scrolls (from a collection of thousands, and not counting the ones in Taipei) to a small (but lovely) art museum in the middle of the Pacific.  But there was that APEC thing.

"Okay, we'll let you use them, but be sure to point out the political implications."  Never once did the docent make any specific reference to Taoism or Buddhism, in which all of these shui mo images are steeped, or certainly flavored.

I explored the installation, twice, then bought the exquisite catalogue to have something to copy.  (Baroness Radon, Xiong Shan Di,  in the style of Wen Zhengming.)  Then, completing the cultural afternoon, off to the piano store to find some music other than hymnals to play on my new keyboard. "Do you have any easy Bach?"

"There is no easy Bach," the lonely man said. (Who shops for grand pianos on a Sunday afternoon after Christmas?) "Maybe you'd like lessons?" he leered. (Memories of Ludwig.)  I picked a couple of easy collections from baroque to new age--they LOOK easy--and then the guy asked me if it was a full 88-key unit.

"No.  Sweetwater told my husband I didn't need it unless I played Chopin."  Which I don't. The guy was sceptical, but ran my Visa anyway.  A blog post can be expected wherein I discuss how something that looks easy isn't.  (I discover George Winston is fond of F# Major...six sharps.  That doesn't look easy.  But he makes it sound so easy.)


Then a less cultural evening immersed in a contemporary Korean drama with Song Il-gook, uncharacteristically scruffy and sassy (but still utterly arresting) as a detective on the Seoul Homicide Squad.  Like a "Law and Order: Kim Chee Unit," it was such a strange contrast to his addictive sageuks.  Like any day in Asia, everyone is on their cell phone all the time and the ubiquitous devices provide creepily efficient ways to track victims and criminals and wayward squad members.  And if the cell phone GPS locators don't work, "Get me the surveillance footage!" No swords, no archery, no horses. Big Techno-Brother is alive and well in South Korea.  Still, when this series is done, I will find it difficult not to follow Mr. Song into the next drama, about kim chee and tofu restaurants, called "Fermentation Family."

I'm awakened at 4 a.m. by the light of the full moon and go to the lanai for a little meditation time to soak that energy up. And indeed today, the first regular Monday back in the office (but wait, MLK Day is next week!) I feel strangely energized and fresh. I'm in the mood for background music, and I brew some oolong in the pretty little gaiwan I bought last May in Wudang. An affectation to be sure, sort of the six sharps of tea brewing. But it feels so elegant, the tea tastes so good after pushing away the leaves with the lid, like a graceful concubine or a cool and collected martial artist in a Chinese historical drama. 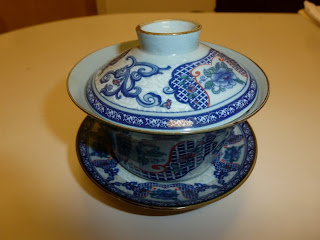 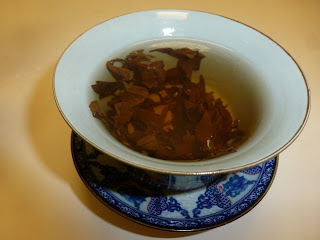 Posted by baroness radon at 4:02 PM

Certainly sounds like you've been busy - doing things you want to do! That's awesome. :)

The years begins nicely. I look forward to my interrogation.