Such a calm day, no mail, no obligations, no noise, a pleasantly cool morning after a pleasantly cool night. I brew some coffee, clean the Yellow Emperor's night soil box, wash pots and pans left (by a sleeping someone who will remain nameless) from yesterday's kielbasa, kraut and blackeyed pea feast, and settle in to read, sitting in my Grammy's rocking chair, on my lanai.  A bagel with cream cheese and black raspberry jam,  coffee, and later, but not very much later, the last of some nigori sake ("Dreamy Clouds,"  the "Summer Snow" having been demolished a couple days ago; what other booze has such entrancing names?). 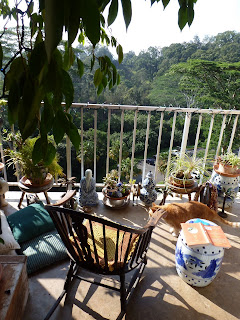 I am reading Years of Red Dust, some anecdotes and tales (stories, fiction) of Shanghai from 1949 to the more or less present (2005).  For some reason, recalling a previous read, I thought the author, Qiu Xiaolong, was a woman, but I am mistaken.  I am reading these stories through the lens of my own visits to China and history of China watching, and trying to adapt them to my own experiences.  Is my condo association like a neighborhood political action committee?  No, but it is frighteningly conceivable.  Am I trapped in some world of limited potentials by my family background, my political persuasion? No, but I could be.  But perhaps to even imagine these parallels, is to romanticize--not quite the right word--the reality of China from 1949 and on.
I follow the nigori with a bit of red wine.  This might have meant something to Mao.  To me, it meant a nap.  Such a calm day.  My red Christmas cactuses are outpacing the white in their blooming. It means nothing, but I can imagine that it might have on Red Dust Lane.
Posted by baroness radon at 5:28 PM

Not much better than a lazy, relaxing day!