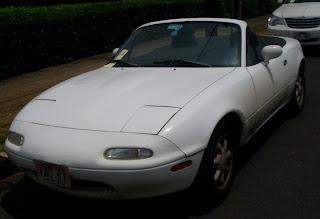 At about 9:10 this morning, on the way to my Chinese painting class, the 200K milestone was reached. I missed recording the first major odometer rollover, to 100K, but I did catch 111,111, when a friend observed that TAO 61 (my beloved 1990 Mazda Miata) had achieved oneness. So next is twoness (222,222) , an achievable goal according to my spectacular mechanic who has kept me on schedule with oil changes and preventive maintenance and held my hand through a restoration after the car was totaled about 5 years ago; a blown head gasket somewhere around 50,000 miles; a clutch replacement at 125K, a new radiator (maybe two), and the usual perplexing but inconsequential problems that take it out of commission for a few hours now and then...not so often really. I must commend the Mazda establishment for a remarkable vehicle; I should run so well for my age. I reckon the car is about 91 in car years. It's officially a 1990, but it really rolled off the line in 1989; it is 20, it is vintage. I still get the occasional admiring compliment, "What a cool cute little car!" 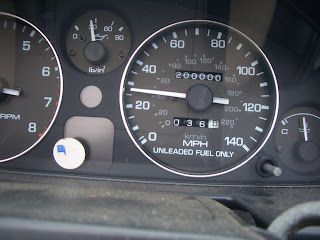 And it is. After all these miles, I still get the same pleasure I did when I test drove it on Lagoon Drive, a long straight stretch behind the airport, running it through five gears trying to redline it. When the weather isn't rainy, I drive with the tonneau (cockpit cover) so I don't have to worry about putting a top up or down, and even when it's moderately rainy, the windscreen is so well designed that as long as I maintain at least 20 mph, I don't get wet. People ask me why I don't get a new one. And I ask, why should I? This car is a PET, like a faithful reliable pony; I couldn't put it down. Someday maybe, when my mechanic says it's hopeless, when it breaks a leg and needs shooting. Then I might consider a well-depreciated Jaguar XK-8, the only other car on the road I have ever lusted after. (The Miata all grown up, in evening clothes.)
I'm not too promiscuous when it comes to cars. Sure, there have been the occasional rentals. My Dad, who philandered his way through cars, would always ask about whatever economy rental I drove up to Ocala from Orlando, "So what do you think of that miscellaneous late model Dodge/Ford/Chrysler/Chevy/Toyota?" I didn't think anything of it. I didn't even know what it was (usually a two-door compact with unnecessary features I couldn't figure out.) Whatever it was, was just a car. Anyway, I wish he were still alive so I could tell him about my Taoist immortal, achieving oneness, aspiring to twoness, and with only one clutch replacement! He taught me how to drive a standard transmission; riding a clutch was a SIN! See, Dad, I did good!
In honor of the milestone, it seems the police decided to give me a card. Two miles into the new order of magnitude, I got a parking ticket, despite the SHOPO sticker on the windshield; there's a myth that won't die. A sign that you give money to the fraternal police organization buys you no indulgence. 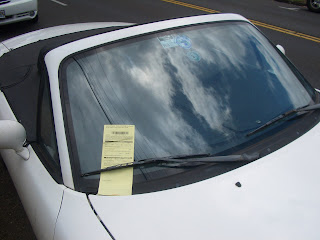 I haven't acquired too many tickets with TAO 61. Three speeding violations...and never for going REALLY fast. They were insults, really. A couple of other parking citations. Amortized over 200,000 miles it is hardly significant, and the total would make only a moderate contribution to the SHOPO fund.
And in yet another instance of synchronicity, in the mail when I arrived back home was the request to renew my registration. $162.36 for a registration that carries the notation"Insurance salvaged rebuilt vehicle," which pretty much guarantees that no one would ever buy it, not that it is or ever will be for sale. If the car required a visa, it would be time to renew that as well!
When TAO 61 was new (and truth be told, I got it at 30,000 miles, but now that sounds barely broken in) I could usually fill it up for about $14. The mileage has remained pretty constant since 1994, but the price has not. Earlier this year I was delighted to pay only $25. But recently the price has gone up again for the Aloha spirit, though not (yet) as bad as it was this time last year. But in my little roadster, it's still inexpensive. My usual fill-up, 9.5-10 gallons, is running up to thirty bucks, more than double when I started. I know because I'm one of those people who compulsively records every fill-up in a little book. I could calculate the lifetime mileage if I wanted to average 15 years of notations.
Posted by baroness radon at 9:37 PM

Oh, this makes me miss my Bonneville! I had that thing for years and years- and it rocked. Like your Miata, it only had small things replaced - it was still the original engine and everything else. LOVED that car, and by the time we sold it, it was on 250k miles (the speedometer stopped) - and still running! (But admittedly starting to run badly...)
Cars should be bought and driven until they stop. I believe this - it just makes good sense.
Congrats on 111,111! Here's to many more miles!

i have never had a car long enough to love it all that much. i have loved a few cars, but not to that level. i had a dynasty. i really loved that car, but gave it up to follow some dude to britain...

and sybil, neener neener, i have ridden in TAO 61 with the top down!!!

There is a Cosmic laughter which comes into being when the whole joke of this Cosmos is understood.
http://hawo.123log.de/2009/08/07/life-must-be-just-a-laughter/