As my reader doubtless knows, I am a little disappointed at not having plans to return to China this fall. But a little virtual vacation perked me up yesterday.
After overcoming a stomach bug early in the week, and with the new moon (and eclipse) on Wednesday, by Friday I was feeling a little more energetic. I sought out a co-worker for a noon stroll to stretch my desk-bound legs. We walked to the airport, Honolulu International, which is right next to our office, and took advantage of the cool baggage claim area outbound, the ticket-counter floor returning, for a pleasant hour of walking and chatting. For a while I had a sense that a TSA agent was following us, but it was not the case. She ducked through the security perimeter, back to the area where you can actually see airplanes, where I really would like to be. Still, I absorbed the airport energy of coming and going, envying and comiserating with the folks in the security lines and at the baggage carrels.
So energized, at the end of the workday I went to a reception in Chinatown hosted by my Chinese painting teacher. She said some of her works and others' would be on display at 5, so I left the office a little early to get to the Chinese Cultural Plaza on time; but alas I could find no reception, no paintings, just closing shops and an empty stage. Then I recalled she had said the Chinese Culture Center -- I didn't know there was a difference. I asked a guard at the Plaza who told me, indeed the Culture Center was on the second floor of the Cultural Plaza. But when I got up there, the doors were locked. I was feeling a little like I was in the Middle Kingdom by then, and taking that forthright attitude you learn in China, I assumed the hand-made sign in Chinese characters next to a not very inviting staircase might lead to the reception. It did, and suddenly I emerged into an exhibit hall full of calligraphy, needlework, photos (with a nice photo of Hong Kong Harbor, very nostalgic), paintings, and my teacher.
I have long overcome xenophobia, but I was a little taken aback to realize I was the only haole (Caucasian) among the maybe 150 people there. Not only that, but dressed a la Chinois; that morning I had with no particular intention donned one of my Wudang-acquired tai chi suits as I sometimes do for casual Friday. At the reception I felt simultaneously out of place and a perfect fit.
My teacher showed me her paintings, and a couple of her more advanced students'. "You exhibit next year!" she said. I just might. Some of the work was way beyond my ability but some was below. Perhaps the work of children.
I recently read a charming little book, Painting Chinese-A Lifelong Teacher Gains the Wisdom of Youth by Herbert Kohl, a well-known progressive educator who at a crucial moment in his career (unplanned retirement) decided on a whim to take a course in Chinese brush painting. Only at the first class the 69-year-old discovered that the other students were 5- to 7-year-old Chinese kids. It was a revelation to him to be with children and unable to teach them. Indeed he learned from them. I was particularly taken with the passage, "Old age is a time to contemplate and understand the contradictions [of life], and find a way to live in harmony with one's spirit and conscience. ...to have a second childhood and grow up again on a more conscious level, and being able to put it into paint, music, words, and gestures seems to be the art of aging. There is no need to resolve everything. Death will take care of that." How very Taoist.
I left the exhibit reluctantly, declining the reception's dim sum because the Wizard and TAO 61's mechanic were waiting for me at one of Honolulu's two Irish pubs (across the street from each other, the Irish neighborhood I guess, which abuts Chinatown). But I hadn't really left China yet. I walked out of the CCC/CCP past the bronze statue of Sun Yat Sen. 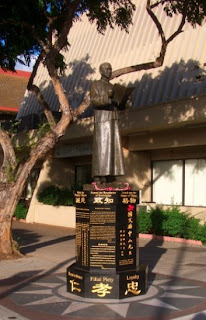 Like any proper Chinese city, Honolulu has a memorial to the good doctor, especially because he went to Punahou School (same as President Obama) and a good portion of Hawaii's Chinese have their roots in Guangzhou and Taiwan, old Nationalists and KMT supporters. I'd never given the statue close attention before; it stands just outside the Legend Chinese Restaurant, perhaps named in recognition of the man, or the statue. I took photos like a tourist, noting the gilded wisdom carved into the marble pedestal. Then I realized that for the tourist from Iowa or Maine, gawking at our very authentic Chinatown, this was another country. 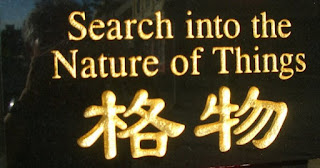 Quotation from Dr. Sun Yat Sen
Three Bombay martinis and a Shepherd's pie later, I was back home from my mini virtual Chinese vacation. But I realized I could go again any time. And I did in a way: Chinese painting class this morning, where I am one of two haoles in a class of 20 that pretty accurately reflects Hawaii's ethnic distribution of Chinese and Japanese. But not a tourist, really.
Posted by baroness radon at 7:55 PM

What a lovely time you had! I love the story of the oldish man taking the class with children. :)

It's a nice little book. I got it on the cheap as a remainder from www.chinabooks.com, but Amazon has it too.

Thanks for pointing out this lovely blog entry of yours to me. And this seals it -- I think your Yang Side blog is the one that I'll put on my blogroll. :)

Whatever, but I think I have more fun on the yin side...
Thanks for reading/visiting.