One Hump or Two? 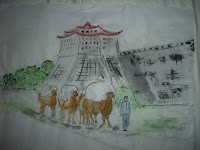 Quick, how many movies can you think of that feature camels in major roles?
I can name two: " The Story of the Weeping Camel" and "The Big Animal". Maybe three if you include "Lawrence of Arabia", but they were Arabian dromedaries and had the same supporting roles, so to speak, as the horses. And four if you include "The Ten Commandments", but it's not really historically accurate that the Jews took camels out of Egypt when they left anyway. And five, the camels in "Kingdom of Heaven", Arabians.
For me, as screen stars, it's those big Bactrians, the shaggy two-humpers, that deserve the Oscars, in the "Weeping Camel" and "The Big Animal."
For a long time, I thought the only movie with a camel as a central character was "The Weeping Camel", a National Geographic documentary about Mongolian nomads who are dependent on their herds. It's a fabulous tale of magic and the clash of modernization against the old ways.
But then along comes "The Big Animal", a Polish film about individuality and eccentricity and its clash with a rigid society that can't tolerate anything that hasn't been properly assigned a taxable category. Not that far from "The Weeping Camel."
I wonder if there is a camel's actor's guild?
I don't know why I didn't publish this post earlier; ( wrote it some weeks ago, but this Google posting seems to limit me to the day I started my essay...one of the problems of blogging...I can't ruminate and edit a post over time). I'm too lazy/busy right now to create links to those films. Just go to IMDB and you'll find all the details. I love these movies.
My pathetic painting above is inspired by a B&W image in John Blofeld's "City of Lingering Splendour-A Frank Account of Old Peking's Exotic Pleasures." A good read. Google that too.
And if you really care about camels, read "The Lost Camels of Tartary," by John Hare. When it comes to endangered or fragile species, some people like pandas. Some people like Florida panthers. Some people like wolves (not that they are fragile or endangered, really.) I like Bactrian camels.
Posted by baroness radon at 10:00 PM

I came up with the same movies as you - but I've never heard of the latter ones! I also thought of Star Wars - those desert camel things they rode...
But the painting is lovely!
I like camels. I am way into elephants.