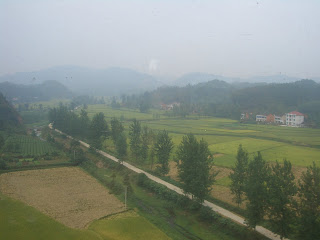 Approaching Mountains by Train
Both train trips to Wudang, from Beijing, soft sleeper, and from Xian, hard sleeper, forced the group together; the pressure brought out personality quirks that would give me nicknames for my co-retreaters. I tend not to quickly remember people's names, and just as easily forget them. But I still vividly remember Mr. Clean and the Leprechaun, Heidi and Miss Shiatsu, Miss Saigon and Madame Pele.
For some reason, on my second trip, people's names came more easily; it seemed a slightly more serious adult group. Or it might have been me. In any case, it was always a trudge with luggage, settling into sleeping compartments (some people, despite their commitment to the Tao, cranky in close quarters), finding the dining car where we always wanted to linger after leisurely breakfasts and lunch but were usually shooed out despite the car being empty. Coming down from Beijing, I had a shock; when I woke up and went to go to the dining car, the train seemed to be going in the opposite direction. The dining car was not where I expected it to be. The train had recoupled in the middle of the night. Port and starboard on a train car work differently; they are changeable, like yin and yang.
The train from the north through Hebei and Henan went through hours and hours of corn fields, like Iowa and Kansas, the last thing we saw at night, and we were still rolling through them in the morning. Someone wondered where all the people were, concluding the great population of China was a myth. Of course, they were all in the cities, and who could blame them. When we did see humans, they still seemed to be farming in the Han Dynasty. No American mid-west grain combines and plows to be seen. Lots of very thin slow moving peasants.
Actually, there was more industry coming south-east from Xian, where we went in and out of countless tunnels through the mountains I had just flown over a day or so earlier. Lots of road building, bridge building, tunnel building.
In either case, arriving at the Wudang train station was a mad scrabble off the bus; it was only ever a five minute stop so we had to be ready with bags and exit, fire-drill style. Then to catch a bus to go up the mountain. 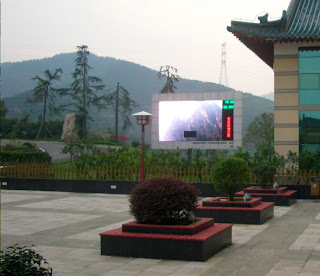 The bus from the station took us only to the entrance where we once again had to transfer bags and people to enter the Wudang area; it is a little like a National Park so we had to pass through gates. An addition in '08 was the ridiculous outdoor TV screen installed to show us digitally what we were actually looking at. I think it said "Welcome You to Wudang."

Our monk was little bemused by the TV.

But back through the turnstiles, and we were on our way up. 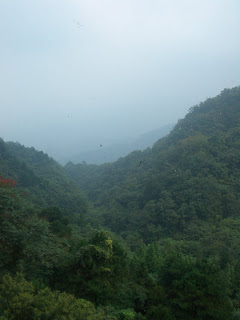 The bus twisted and turned up up up for about an hour in mountains that seemed like a cross between Vermont and Pennsylvania. Just way more grandiose. In '07, Miss Shiatsu and I were weeping at the beauty, holding hands like children. "We're almost there!" In '08 I shared a seat with a nice Peruvian massage therapist from Florida; he was a big bear of a guy, but his breathless comment was "It's beautiful, awesome." How strange that I was accompanied by massage specialists on both these trips up the mountain. 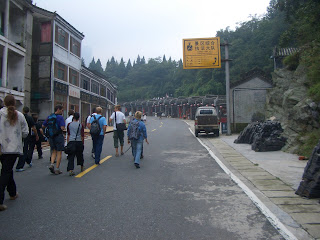 Finally the group invaded "Crow's Ridge," a little strip of a village, not exactly Aspen, with hotels in various states of disrepair on one side of the street, shops --concessions, really -- on the other. 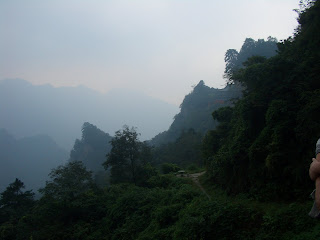 But through a short tunnel between a couple of the shops on the right, and this was our first real view of what we would call home for the next two weeks.
Posted by baroness radon at 10:19 AM

Beautiful! But I must know - did you GET any massages?!!!

Actually yes, there was Jerry, back there in Beijing, and some acupressure to relax shoulders. In Xian I did not get the moxibustion and cupping treatments that left others bruised. Chiense massages can be a little brutal.