Arrival in our pre-Wudang destinations--Beijing '07 and Xian '08 -- provided great preludes to what we would find up in the mountains.

First full day: visited temples in Fragrant Hills park, hiking in the heat, some introductory tai chi, meditation and qigong practice with some Taoist practitioners, a wonderful vegetarian lunch, observing lots of traditional Chinese activities and arts. I wonder what it must have been like during the Cultural Revolution. Was all this stuff underground and ignored? I am told Mao didn't mess too much with the Taoists. I wouldn't mess with them either, even though they are very attractive. 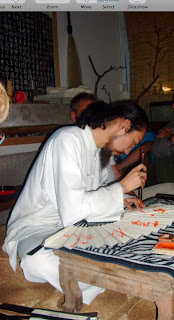 We visited one of the brothers in his little literati home where he demonstrated calligraphy, and, of course, sold us some fine pieces. Big energetic works with the ideograms of "Tao" and "Dragon" were very popular. I was captivated by a rather large scroll that was the first chapter of the Yellow Emperor's Classic. It's quite large, and more costly at 2000 yuan (nearly $300US) than the simple ones; I can have it for 1500 (about $220), but I have only 1490 on me. "Don't worry about it," Teacher Shao says. Well, that was only about a buck off. I still haven't figured out quite how to display it in my home. I take it out and look at it from time to time though. I need to have my Chinese painting teacher look at it to assure me it was worth it. 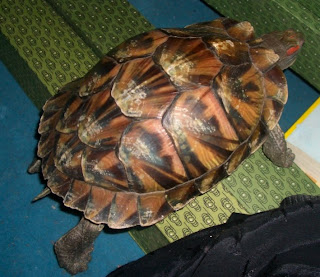 Teacher Shao's pet turtle wandered around the room like a cat while we sat on his floor. 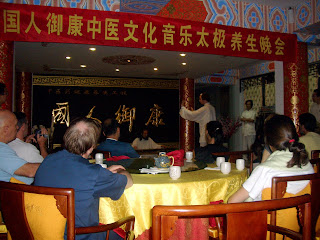 We then savored another veggie banquet at a nearby restaurant, tasty and filling, unaware that it would be the last extravagant meal we would have, courtesy the tour, for three weeks. We also enjoyed a guqin concert by Teacher Shao. Some of our group also demonstrated their kung fu, qi gong, and sword techniques.

After dinner, we walked back to Teacher Shao's to pick up our calligraphy. It was hot and claustrophobic and I didn't want to linger, so I left early in the darkness with another new friend, a nice young Brit who taught theatre to high school students. We thought we knew the way back to the hotel, but after circling around the not too well lit neighborhood several times, asking non-English speaking strangers to point the way to the hotel named on our room keys, we finally arrived at it. But who knew there were two hotels with the same name! We actually had to enter the door to realize we were not in the correct Fragrant Hills Hotel. Just like two Tony Leungs. Our hotel proved to be the shorter one.

I wake at dawn, a little overwhelmed by the quick HK visit and flight to Xian, which included the most astonishing views up over the mountains, flying low, the mountains just kept getting more and more dramatic, until they suddenly fell off, like the front range of the Rockies, before the grand plain that Xian sits in. The morning air in Xian is thick and hazy and smells of coal. After a hotel breakfast that affords some initial bonding among this group, we visit a park along the city walls where we do qi gong to calm us after travel. Chinese park visitors watch us, and some join in. 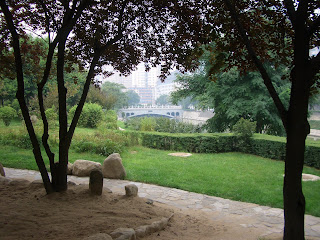 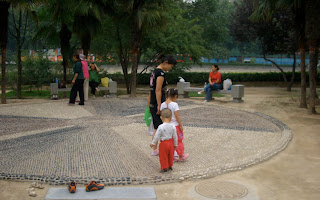 A New Way of Walking

In the park, there is a curious stone pattern to encourage a kind of foot reflexology as you walk around it. My plantar's fasciitis was a little sensitive, so I avoided this stimulation. Kids love it. 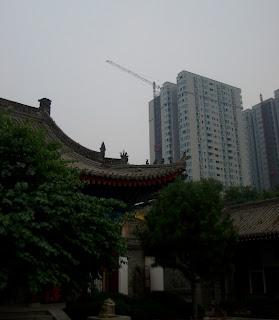 There are always auspicious animals on the roofs of the ancient-style structures; don't know that the cranes on the new buildings are quite so auspicious.

Posted by baroness radon at 7:55 AM

I am loving the pictures and trip down memory lane! I REALLY love your hen painting down there!!! (Yes - I am reading it all even though only commenting here. Time eludes me some days!!!)

Thank you thank you, dear Sybil. I am doing it for you. Well, not completely. But I know you were interested. Bless you!! But see my yin post of today, I think I have found a way to China in the Spring. I feel much better now.

I DO appreciate your interest!