Suffering island rock fever and just a little existential despair, I conclude this is frustration after realizing that for the past two years, on this very day, almost a ritual, I had arrived in China to spend three weeks studying, hiking, meditating, and physically and spiritually recharging myself in Wudang. These were very different from my previous experiences in China, fairly frequent visits over the past 20 years to Hong Kong and Beijing with my academic husband, and some associated tourism. My Wudang experiences are considered "cultivation" in Taoism. My current condition is called "backsliding," for which my Episcopal background provides constant forgiveness.
I did not have the ease or reliable facilities to blog while I was on those mountain retreats; now it occurs to me that one way to comfort and perhaps cultivate myself, and possibly intrigue you, reader, is to revisit the journeys over the next three weeks in equivalent, if not real, time, based on my extensive personal diary and photos. In fact, if I didn't tell you this was history, how would you know? And, reviewing these events will help in development of my novel that is taking shape. So much to do, so little time. I don't know why I think this should be inappropriate for a blog: travelogues are often published and enjoyed long after the journey. Indeed not long ago I read one that was published in the mid-1920s.
ARRIVAL IN THE MIDDLE KINGDOM
In 2007 I approached Wudang, a mountainous region in NW Hubei, via Seoul and Beijing; in 2008 via Hong Kong and Xian.
On this day in 2007, we had been tentatively approaching the Beijing airport, sometimes 10 miles out, sometimes 13, a passenger cabin flight display providing data that seemed more disturbing than informative. My seatmate, a frequent-flying Korean businessman tells me this approach is because Beijing must prioritize flights and the long international ones get first dibs because they are lower on fuel. Coming from Incheon (what a change from the old barbed-wire protected Kim Po), we did not qualify, Korea apparently considered a domestic point of origin, not international. He then offered some cynical advice: "Be careful," he said, "everything in China is counterfeit. Even the bottled water." The he commented on my PDA. "Do you like the Blueberry?" he asked.
After our hard Korean Air landing, the airport was chaotic and largely still under construction, improved from and much more commercial than what I remembered from 1987, but not promising for upcoming Olympics activity either. They had a lot of work to do yet. Despite arriving in the midst of Olympic fever, I fortunately avoided it due to the nature of my visit (spiritual Olympics).
There was great congestion at passport control --all those international flights that beat us to the gates --with long lines for Chinese Nationals and for Foreigners. After 10 or 15 minutes of waiting, a lot of the Foreigners suddenly remembered they were really Chinese Nationals and moved to that line.
After meeting my contact and another late-arriving co-retreater, (a nice older Italian man from Montreal who spoke French) we shared a night-time taxi ride on freeways (routes that were less than secondary roads for horsecarts and bicycles 20 years ago) and fetched up in our hotel in the Fragrant Hills, to enjoy some agreeable and quiet moments to relax. 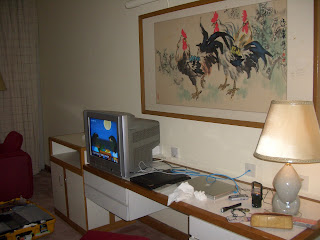 A Room with Roosters
The hotel had a gallery of Chinese paintings for sale; perhaps that and the roosters in my room inspired me to begin my own painting adventure recently. Fowl have been my favorite subject, along with shan-shui ink landscapes. 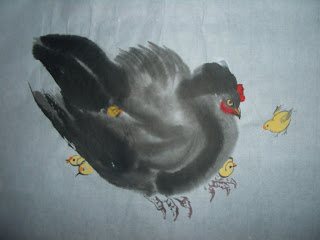 Hen, by me
The hotel provided a calm opening to the '07 tour, in remote suburbs with clearer cleaner cooler air than the new Beijing, which, 20 years after my previous visit, I barely recognized. 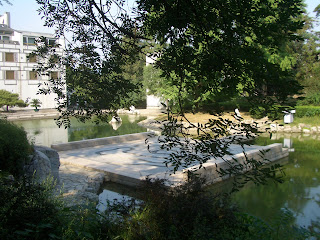 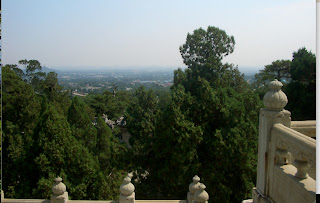 Distant Beijing
My '08 arrival in China was considerably different. Laying over briefly in post-Olympics Hong Kong, and then quickly flying to Xian (a substitute for Chengdu, the original destination, but that all fell apart, so to speak). I was overcome by urban energy, yang compared to the previous year's yin in the Fragrant Hills.
Hong Kong was unusually clear and beautiful. This strange exclamation point erected at the harbor is an artifact from the previous month's Olympic hoopla. 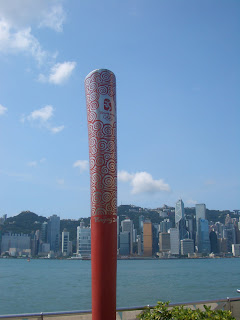 What's the Point?
After a morning trek about Kowloon and Central, I was ready for my DragonAir flight to Xian. My first moments in that other ancient Chinese capital seemed a little dreary. My hotel room, decent enough but not like the fine digs in Hong Kong, but certainly better than what I had to look forward to in Wudang, had a view. But not one you wanted to look at, really. 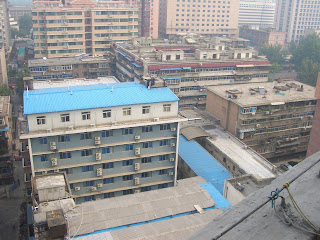 No Terra Cotta Soldiers Here
Posted by baroness radon at 7:34 AM