With some poignancy, our Chinese brush painting summer session ended on Saturday. Because not many of these students will be returning to the same class that I hope will be offered in the fall, it felt like saying goodbye to my Wudang retreat friends. I am hoping for a Tuesday evening class in the next session if enough folks register; otherwise classes are daytime, weekdays, attracting retirees and persons of leisure, neither of which I qualify as, yet.

Lessons learned:
Chinese painting is qigong with a brush. There is an altered, heightened perception, not drug-induced, that has to do with looking at things from a different angle, backwards really. As I observe the trees breathing in the breeze from my lanai, I see them differently, more acutely, I see the energy, not the flat tonality and precision that is evoked in western style painting. 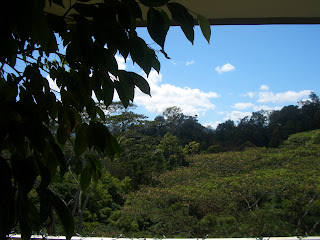 Imagine this breathing
An acquaintance, unhappy in Hawaii, once complained that Chinese art was not original, it was not creative, it WENT nowhere. That copying thing. (He also refused to eat with chopsticks, because, he said, they were not a "technological advance.") His home was decorated with lovely 19th century English botanical prints. I do not think he ever accessed the energy, the qi, that is the essence of Chinese painting. My teacher has explained that painting is not to paint what you see, but what you feel. This is a very critical difference in Western and Asian perception in painting. Chinese painting, I have come to understand, is a kind of structured impressionism (is that an oxymoron?)

After class I stopped by my new favorite shop in Chinatown (source of books on painting and supplies and DVDs). The proprietress called me on my cell earlier this week. She had a new book she thought I would be interested in called Things Chinese. I told her I would stop by after class, and incidentally, if she had any more Vincent (drool) Zhao Wen Zhuo/Chiu Cheuk Man videos, I might like to see them too.

The book was great, the sort of thing I would have picked up if I was in Hong Kong (priced at 98 yuan, but I paid close to twice the value in US dollars, so what, and could have got it a little cheaper on Amazon--there's one left there for you.) It's a nice PRC-produced colorful encyclopedia full of detailed explanations and photos of things I have seen many times in China and come to appreciate. (But I must note that some of the "Chinese things" are Tibetan.) It will be a great resource in my novel-writing. Screen walls, curio stands (one of which my first Chinese landlady/popo in Honolulu had), cloisonne and lacquer ware, dumplings and wolfberry, and pipa, guqin and huqin (musical instruments).

Then she pulled out a bag of videos she had set aside, apparently reading my mind, presenting "Seven Swordsmen" and "Book and Sword." ZWZ stars in them.

"These are what I was going to ask you for!"

So I bought them, as well as an interesting book of Chinese proverbs. One telling proverb was: "A person without a smiling face should not open a shop." I have spent a lot of money at this shop recently because she has a smiling face. Yeah, I know she wants to sell me things, but loyalty to a smiling face means a lot. And she gave me a complimentary copy of "House of Flying Daggers," which sort of covers the overpricing on Things Chinese. Actually, I already have that film on DVD, but it would have been rude to ask for something else, so someone gets it as a Christmas present. (Let me know if you want it.)

I went to my bank last week to get some special certification to effect a stock transfer from my father's estate. The first person I talked to said, quite formally, "This requires an officer of the bank, and there is a $25 fee."

Whatever. Dealing with financial things after a death is just really depressing; Dad did a pretty good job of leaving things in order, but there have been a couple of puzzling items. Even he didn't know why he had these particular stocks, some transfer by Prudential from his life insurance, of which I was the beneficiary.

When the bank officer came to help me, his first question was, "Does this represent more than a million dollars?"

"If it did, do you think I would be here asking for your help? I would send my lawyer. Actually, I think it represents not much more than a thousand dollars."

He did the signature certification, and then said, smiling, "Since you have been banking with us for so long, we'll waive the fee."

This discussion had been about amounts from $25 to a cool million. Still, I was weirdly touched by the acknowledgement of being a loyal customer. It's not the amount, it's the attitude and the service.

I love the smiling quote. So, so true.
You need to post more of your paintings! I'd love to see them!

Sybil, you are so faithful!

I have been thinking deeply about your comment on my Hawaii anniversary post; I think it requires some contemplation and eventually it will turn up on the yin Tao 61.