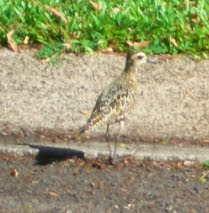 Now that it's August, I have been anticipating the return of the kolea (Pacific Golden Plovers) whose daily presence I have missed since late April, when they flew off to Alaska to breed. They are usually due back in Hawaii on or about August 26, but this morning, as I left my wooded apartment complex, and as I was consciously thinking about the birds, there appeared one on the street. I stopped to chat and photographed her. I'll call her Hello Dolly. She has good camouflage as you can see. Since I have seen none since they left, I do not assume this bird stayed over the summer; they are territorial and I would expect to have seen her sometime in the past three months.

What brought her back two weeks early? Could it be the full moon? Perhaps it was the world-wide meditation for peace that was scheduled for the peak of this lunar cycle (which I regrettably slept through; it was to occur at 3 a.m. Thursday, August 6. I do recall that I slept well and contentedly.)
Could it have been Sarah Palin's resignation?

I'm just glad the bird is home. Like sprouts on pruned branches, trade winds after tropical depressions, it renews my faith in the cycles of Tao. 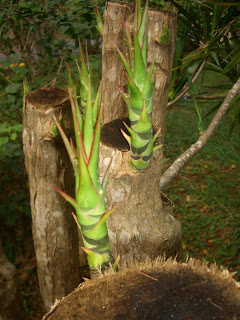 The Sprouts of Tao
Posted by baroness radon at 10:31 AM

Definitely Sarah Palin's resignation. Who didn't want to rejoice when that happened?
:)

I'm sure they couldn't wait to get out of there. She was probably planning a hunting trip. Grilled Pacific Golden Plover, Alaskan style!