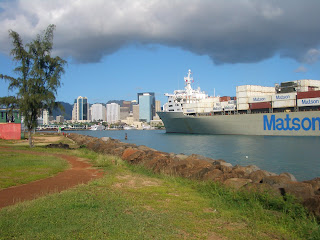 Honolulu Harbor from Sand Island
Today--this week really--is a bit of an anniversary--26 years ago we arrived in Hawaii. And it coincides with Hawaii's anniversary of 50 years as a state. I would never have predicted it at the time, but now I have spent fully half my life in the Islands (not counting the years when I measured my age with single digits). To say nothing of predicting a President with roots here.
We came here because when the Wizard completed his Ph.D., the two best academic job offers were at SUNY in Buffalo, New York, and the University of Hawaii. We were already in Pittsburgh...Buffalo? Hawaii?
I was not easily convinced to make the move at the time; we had a small child (with an age in the single digits) and it seemed so far away. Hawaii was nowhere I ever wanted to go. But a challenge was thrown down about my sense of adventure. And then I learned that Hawaii had a strong Chinese culture. I loved Chinese cooking, had a well-seasoned wok. I once taught a class in Chinese cooking to a bunch of folks in Appalachia, but that's another story.
We had a big garage sale, said goodbye to friends, drove from the New Jersey coast to Long Beach, across the Mainland (although I didn't call it that then) in three-and-a-half days, in a 1978 Honda station wagon with a young child and three cats. Oklahoma in August with the windows up and no air-con--- the cats might escape. (And in fact one did, in Barstow, but we retrieved her.) We all were suffering from imminent heat stroke. Still, due to the Wizard's well planned road trip, we visited the Grand Canyon and traveled on Route 66.
On arrival, I laughed at the Japanese lady in Honolulu who was complaining about the heat. We had just driven through Oklahoma at 100 degrees plus. And now I complain about the August humidity and heat...but it is really so trivial.
A plane trip from L.A. to Hawaii (where the cats had to go into a three-month quarantine) and I felt like we had landed in a foreign country, like an expat. We stayed in a hotel for two weeks, compliments of the university. The hotel was situated over a koi pond. Our son learned to swim in the pool there. Then we found a short-term lease on the edge of Waikiki, until we found a real house--with a Chinese landlady who liked cats. She was delighted that we were Episcopalians. "God always sends me Episcopalians, "she said. "Call me Po Po." (That's Cantonese for "Grandma".)
I wanted to work for the East-West Center, a government-sponsored academic agency, but I blew several opportunities to break in there. I worked at first for the local Blue Cross-Blue Shield outfit for a while, where I was astonished at the liberal policies provided under the Hawaii Prepaid Health Care Act. Later, Hillary Clinton would use the Hawaii model for her own failed reform plan. I have come to be proud and grateful for Hawaii's excellent health coverage and health care.
But better jobs awaited me in high-tech, a sector on which Hawaii has put much economic emphasis, recognizing that relying on agriculture and tourism is not enough. The third traditional sector, defense, has been reliable, and high-tech dual-use R&D is intertwined with the strategic military assets here. For a few years, I worked in one of the buildings in the photo up above. It was great; from the high-rise office we could watch the container ships do their 180 degree pivots to back into the loading area. Once we watched a pod of dolphins come into the harbor, to explore the area before returning to the sea.
So now Hawaii is where we make our living. People think we spend all our time at the beach. To be honest, we don't do that much anymore. But we try to take advantage of the beauty when we can. Actually I can't imagine coming here as a tourist; we get that little jolt sometimes when going into Waikiki for a business meeting (good hotels) or entertaining visiting Mainland friends. But it is nothing like living here, like being at home here.
Living here is about the people, the culture, the food, the environment -- which includes the natural phenomena like earthquakes, hurricanes, volcanoes, and tsunamis -- although generally they turn out to be manini (Hawaiian for small or petty) compared to the rest of the world's. Our recent hurricane threat first got people all agitated and then a little lethargic: just a tropical depression, oppressive humidity, although we knew it could have turned out to be disaster. It has in the past. (That was Tropical Storm Felicia. I worry about the hurricanes that come with "I" names --Iniki and Iwa were two of the big baddies in the recent past. So after Guillermo, and something "H," we get an "I" -- hopefully named "Ijustdon'tcare.")
I have some East Coast friends who have asked, even recently, "When are you coming home?" If you have lived half your life somewhere, that probably has become home. On the other hand, I could more easily move to Hong Kong or Wudang, than back to Buffalo or Pittsburgh.
Still, there are so many pleasures here.
Posted by baroness radon at 6:01 PM

I would just love the chance to live in Hawaii! Although I do wonder, and perhaps you can tell - was it hard for you to adjust, because of the natives (for lac of a better word)? I've heard it is - wondering if you've ever had any bad experiences with that part!
The picture is gorgeous!