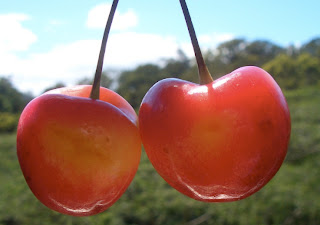 When the kolea come back from Alaska, I always expect that Rainier cherry time is finished, but this season there seems to be some wonderful overlap of these joys of life--migrating birds and fruit harvests.
These Northwest imports (as in Mount Rainier), a glorious cross developed in the early 1950s between Bings and Vans, have been plentiful this year and I scored some today, probably the last batch of the season. I never heard of them when I was a kid on the East Coast; my aunt had a pie cherry tree that yielded just enough cherries for a pie...wily watchful birds usually beat her to the crop. They like Rainiers too, and growers routinely expect to lose a third of their crop to birds.
But now, I can think of no other fruit that is so perfect as the cultivated Rainier: pretty as an apple, meaty as a plum, sweet as a...cherry. (And also very profitable -- they can sell for a buck apiece in Japan.) They make me recall a poem about poetry (not fruit), the lovely Ars Poetica, by Archibald MacLeish, one of the two poems I ever memorized in high school. (The other was "The Charge of the Light Brigade; why would a 7th grade girl memorize such a thing..."Into the valley of death rode the six hundred"... well, it was dramatic for oral interpretation.)
Whenever I see the Rainiers I think of MacLeish's line,"A poem should be mute as a globed fruit." These cherries are poetry on a stem. They are never cheap, especially in Hawaii, but I always budget $50-$75 for them over the course of a season, and have never allowed one to spoil in the refrigerator. There weren't very many last year, so I probably exceeded my budget this summer.
One year, about this time, I was on my way out to fly to Hong Kong for an extended stay and I had a bag of them in the fridge. Everything else perishable had been cleared out, but I didn't want to discard the Rainers so I packed them in my carry-on. But TSA's security professional at the airport was reluctant to let me take them with me. Did he think they were cherry bombs? So I said, "Okay, but please, you must keep them, enjoy, they're really good." He modified his risk assessment and let me take them. And they were a godsend during a terrible hot and humid 24-hour layover in Guam.
With apologies to Lord Tennyson, I say, cherries to the left of us, cherries to the right of us, cherries behind us...the noble six hundred. Life IS a bowl of cherries. 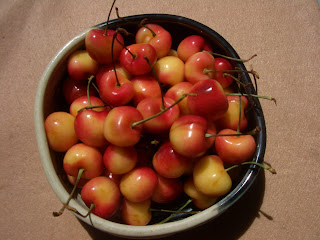 ARS POETICA
A poem should be palpable and mute
As a globed fruit,

Dumb
As old medallions to the thumb,

Leaving, as the moon releases
Twig by twig the night-entangled trees,

Leaving, as the moon behind the winter leaves,
Memory by memory the mind --

For all the history of grief
An empty doorway and a maple leaf.

For love
The leaning grasses and two lights above the sea --

A poem should not mean
But be.
(1926) Archibald MacLeish
Posted by baroness radon at 2:47 PM

YUM.
Now I want some cherries. Thanks a lot! ;)