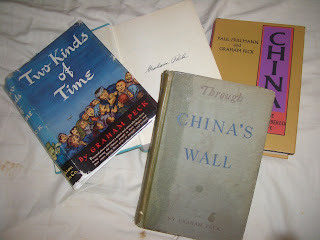 After a few distractions I finally finished Two Kinds of Time, Graham Peck's 725-page volume of "personal observations [while] living among the Chinese people in their villages and their cities during [the war years] of struggle and turmoil."


I had been very preoccupied with why this terrific writer had pretty much vanished from the scene after TKT and Through China's Wall, his earlier memoir. He did write another book, China Remembered, but it's not really his story, about the Flying Tigers that was published in 1968, shortly before his death. Because he was quite adamant in his criticism of Chiang Kai Shek, and somewhat optimistic about the Communist potential, I was surprised that he escaped the McCarthy witch hunts that some other China hands (like Owen Lattimore) were victimized by.


He wrote in the last part of the book --which was omitted in a 1960s reprint --of Mao and Chou En Lai, that " I have no doubt that they are patriots and idealists, who sincerely believe China's salvation lies in the doctrine they have chosen. ... It is quite possible that their regime will become unpleasant and annoying, if not hateful and terrifying, to much of the old and middle class.... But there seems little reason to believe that in a decade or so, the Communists cannot benefit most peasants throughout China."


At the same time, he writes "...I cannot agree with the theories of dialectical materialism. ...I also dislike the Communists' doctrine...This strikes me as an even more grandiose and suspect attempt to carpenter the facts of life to fit a preconceived theory than recent American foreign policy has been. ...I would not like to be a citizen of a Communist state. I have no illusions that I could publish a book as critical of my government's policy as this volume, if the government were communist."


I can only wonder what he would have made of the Great Leap Forward, the Cultural Revolution, Deng Xiao Ping's economic revolution, Tian An Men in 1989, Hong Kong's return to the Motherland, the Beijing Olympics, the Chengdu Earthquake, the economic progress that has been made. Even though most of these things happened after he was done writing, after his passing, his book of observations is still worth reading for his insight and compassion.

I think I am treasuring his autograph in my first edition of TKT because I developed a bit of a crush on this guy...a gay artistic New England blue blood who happened to be in an interesting place in some interesting times. I would like to have been with him and I am inspired by his courage and ability to not only be in a place, but to have a well informed and articulate opinion about what was going on.


It will probably be a while before I pick up China Remembered, so I have directed m 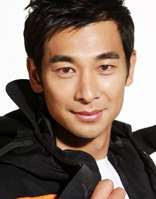 y attention elsewhere for the moment. So my latest crush (roll over Tiny Tony) is on Vincent Zhao Wen Zhou, considered by some to be the new Jet Li, (like something's wrong with the old one?) who stars in an 18-hour Hong Kong TVB series called "The Master of Tai Chi." The owner of the shop where I bought some Chinese painting paper insisted I buy the DVD; she said it had great landscapes to inspire my painting, and it does. I thought it was a movie, but for $20 I got 25 45-minute episodes of this high definition series set in early '30s China. (I'm sure someone will tell me I could have gotten it cheaper.) It has themes a little like Star Wars and Harry Potter, a romantic story line, a philosophical point of view, and much great serious authentic kung fu (with minimal wire work). And the very beautiful Vincent Zhao Wen Zhou (or Zhuo, depending on what source material you look at.) 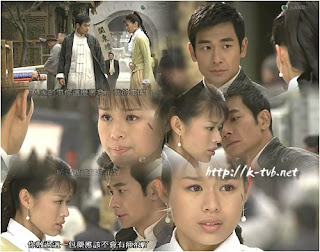 From "The Master of Tai Chi"
Posted by baroness radon at 7:49 AM

Okay - don't know anything about Graham Peck (although he sounds very interesting), but Vincent Zhao Wen Zhou is pretty hot! Sounds to me like you got a good deal on those movies!