I just loaded Snow Leopard which seems to speed things up a bit, but has also disappeared my Word files, specifically my diary of these events. (I am sure I can recover them, but not right now.) Photos and sketchy memory must suffice for the moment.

On the morning before taking the train to Wudang we visit the Chinese Taoist Association's Temple (White Cloud) with Teacher Shao. 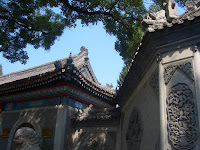 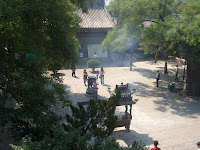 Taoist Temple
A refreshing visit to a foot massage place before our trip leaves some of us with bruised legs. 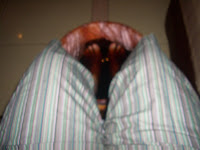 Aggressive Foot Masseur
The women were massaged by men; the men by women. Jerry, my masseur, #31, above, wanted to chat in English. He wanted to know how old I was. "Too old for you, " I said. But he was cute.
LEAVING XIAN '08
Again, visited a Taoist temple, with demonstrations of tai chi. 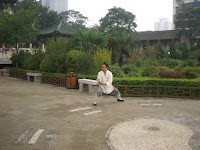 Taoist
I can't recall whether this homage to Da Mo, the person who brought Buddhism to China, was at the Taoist Temple or the Buddhist one. 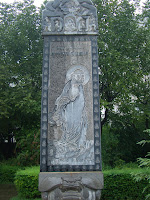 Da Mo
In any case, at the Buddhist temple we acquired a mendicant, and perhaps slightly mad, monk whose master had just died. He didn't quite know what to do with himself. He was the same age as my son; I saw his identity card. We had an extra ticket so he accompanied us to Wudang. He was an odd pet for the traveling Taoists. 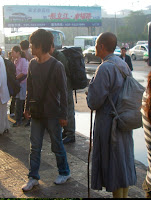 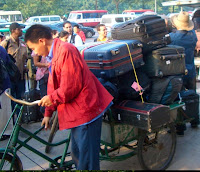 My Bag on the Very Top
An argument broke out about the cost of transporting our bags to the train -- for aspiring Taoists we had a lot, unlike our Monk. In any case, the actual portage of bags was all of a half-block. 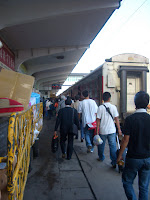 Boarding Train to Xian
Posted by baroness radon at 8:30 PM

Again - I am loving the pics!
And I am pretty sure monks don't worry about underwear - clean or not, or even the lack of - like the rest of us do. :)