I just finished an intriguing little memoir, "Socialism Is Great!", by Lijia  Zhang, a Nanjing woman who came of age in post-Mao/pre-Tiananmen China, eventually escaping her iron rice bowl job, inherited from her own mother, as a "pressure gauge tester" at a missile factory, to become a successful journalist and commentator.  It's a good story, well worth reading, historically later than the important but depressing and ubiquitous Cultural Revolution memoirs.  I could relate to the characters and setting, having been in Beijing for a period the year before Tiananmen. The book is full of angst and courage (and surprisingly more than a little sex) and suggests what it was like in China in the '80s, when Deng Xiao Ping had given the people a new lease on their lives, or at least loosened the leash.

But what struck me most in the book was one of the photos among the requisite dozen pages of black and white testimony these memoirs almost always have.  The image was of Lijia, looking like the eager students I met in 1987, sporting a short denim skirt, casual white shirt and scarf, flesh-colored stockings to just below the hem (the style then), posing, pretty and perky, in a factory in front of a massive Buddha head with workers on scaffolding putting finishing touches on it.

"That Buddha looks familiar to me," I thought.  (Of course, all Buddhas look alike, but not really.  In the Temple of 10,0000 Buddhas in Hong Kong, not one of the images is the same.)

But I did know this Buddha. Lijia's ICBM factory had successfully won the bid to cast the giant statue to complete the "world's largest, outdoor, bronze, seated Buddha"(which it was up until 2007, according to Wikipedia; bigger better Buddhas just keep coming, but I'm not sure where this larger one is). It was to be delivered (FedEx? UPS? ICBM?) to Lantau Island in Hong Kong.  This was well before 1997. Despite a worldwide bid for the Tian Tan Buddha, the Nanjing military factory won it, with some reference to China's 3,000-year history of bronze casting work. (Fortunately it was not to be made of poured concrete.)

I had seen the development of the Buddha park over some years through the '80s in Hong Kong, when it had no political obligations to the motherland. Then even in anticipation of the 112-foot, 250-ton statue,  Po Lin monastery boasted the world's largest Buddha BASE. (Which sounds like some kind of instant tofu soup.) For a time you could walk up the 268 steps to the platform, sans Buddha, to gaze around the mountaintop area, sea to one side, temples and mountains to the other.

I enjoyed seeing the installed Buddha again a year and half ago, although I was not happy at the commercialization of the monastery area. 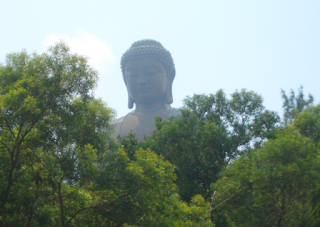 We used to get to Po Lin on a bus that took a scary switchback road to the top of the mountain, like the bus to Wudangshan without the comfort of trees. This time we approached from the airport side of the island, on a gondola sky rail. (Yes, that's smog; I don't like to think about landing at Chek Lap Kok. Although I miss landing at Kai Tak. And check out another great landing. Apparently a lot of pilots on that run do too. A chance to really use skills. ) 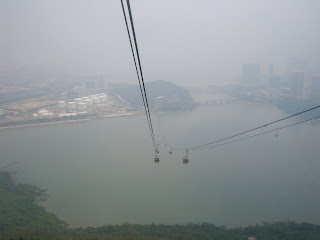 Some years ago, I walked down the trail from Po Lin to Tung Chung, which was then a sleepy village with the ruins of an old fort to explore.  I could see that they were shaving off the geological features of an island to make way for the new airport which would replace the much beloved, but obsolete Kai Tak, more or less in the middle of the city. Now, 20 years later, there is a full fledged city at Tung Chung to support the airport infrastructure with train terminals and a shopping center. 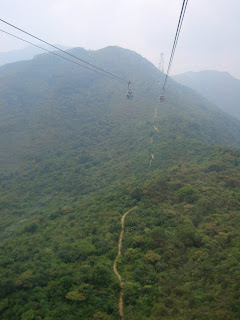 I'm glad I took that hike back then. As I'm glad I had the opportunity to bicycle on Chang An Boulevard in Beijing in 1987, sharing the route with horse carts and other bicyclists. I didn't recognize that street in 2007 until I actually reached the Forbidden City and the infamous square. From Beijing to Hong Kong, change has been the constant.  We used to think of China as a backward country.  Now it seems like the Chinese invented development. And the irony of a Big Buddha produced in a missile factory, something that was lost on Lijia until she wrote her memoir.

That really is a BIG Buddha!!