In the middle of the night I woke up thinking, damn, it's cold.  The Wizard had stolen all the covers on his side, the Emperor was practicing intense gravity exercises on the spot where my feet should have been.  I got up to retrieve the rarely used Korean "Mink" Blanket, a marvel of acrylic engineering, a two-ply plush throw that weighs about 10 pounds. The Wizard brought it back once after a trip to Seoul about 20 years ago.  The faux fur is a major export item, next to faux Louis Vuitton bags.  It is the snuggiest thing, warm as down, but with an animal weight that makes you feel cradled, swaddled even.  The Emperor moved off the bed when I threw on the rug-like cover.  I settled in, for a cozy sleep,  and he promptly came back, and stayed there for the rest of the morning, probably all day. 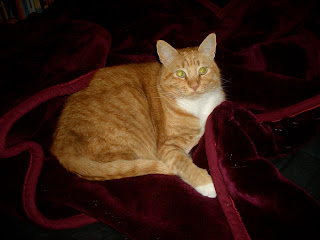 When I checked my room thermometer, which varies not much more than my barometer (I always wonder if the devices really work), it was 60 degrees F at about 8 a.m. on the yin side of the building.  My cell phone weather app told me it was 58.  That's pretty much as low as it goes -- Hawaii temperature annually ranges from about 58 to 92, most usually hovering between 75 and 85.  When you are used to that little variation, 58 feels cold, and 92 is horrible.  (Which most people would call not too cold, not too hot.) My new refrigerator tells me it is keeping my perishables fresh at 34; I can't imagine living in that anymore.

I certainly hope this tempts you to consider  a Hawaii winter vacation: the state needs your tourist dollars.  Think of it as a charitable donation to education.

Posted by baroness radon at 8:00 PM

Temperatures are interesting. In the winter, when occasionally our temperatures hit around 60, it feels like 90. People run around town in short sleeves and flip-flops.

In the summer, when occasionally our temperatures dip into the low 40s or high 30s, it feels like zero. People run around town in outfits that would put Nanook of the North to shame.

It just goes to show that everything is relative!!