Yin in the Yang

The angelic Christmas cactus continues exuberantly, but I can tell there is yin in the yang; most of the blossoms are weakening, even though there are still buds opening. Still beautiful but beginning to pass its prime. Its red cousin wasn't as prolific this year, likely because I repotted it last spring and I think it is cramped and unhappy in the new pot. 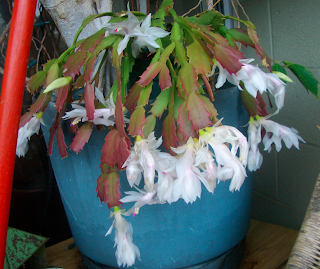 An explanation of the strange red-orange structure at the left is warranted: it's an old broomstick propping up an equally uncomfortable large fig tree in whose pot the cactus also resides.  It reminds me of a tale the Wizard tells.  Visiting a beautiful garden in Kyoto, he observed that the graceful plum tree would look better if it wasn't propped up with a 2X4.  His host informed him, "Japanese people don't see that."  Likewise, I am blind to the broom handle, but not to the blossoms.

The Wizard observed that Westerners might prop up the tree with a thin carbon-fibre rod, painted to match the background, to make it invisible.  For my plants, it is probably soon time to just do a good repotting; I'd like to think they could hold their own.

I just think the red broom handle looks good against the turquoise - y color of the pot.
I am all about color. :)

And I guess it brings out the red in the cactus fronds...