First Soup of the New Year 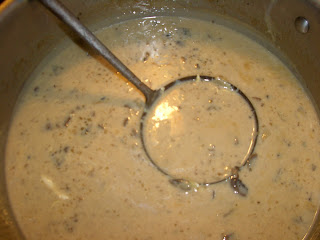 It's cream of mushroom soup.  Today I polished off the last of the Christmas turkey soup, microwaved for lunch at the office.  (Soup is really the only reason for having a turkey, well, except for the stuffing and gravy, but that's just soup of a different consistency.)  So sans turkey, I attacked two huge bags of mushrooms the Wizard had scored...I mean really huge, maybe 6 quarts of Criminis and ordinary mushrooms.  He'd been hinting at mushroom soup for a few days, so I chopped all those fungi, sauteed them with onion in butter, and then the fun began.  I like Fannie Farmer's old cookbook, the 11th edition (~1965) which includes butter, cream, eggs, and sugar in practically every recipe, set in really appealing typefaces.  My mushroom soup recipe falls open all by itself, the stained page testimony to its longstanding appeal. (A peculiar sense you won't get from a recipe on epicurious.com.)

The recipe is pretty simple: to the saute, you add stock (chicken), and cream (or half and half), and for a variation, some beaten egg yollks. Throw in some Minute Tapioca to thicken it up. (Minute Rice sucks, but Minute Tapioca is useful.)  Did I say to saute the onions and mushrooms in butter? No sugar. (But if you wanted to, you could...)

But, since at this point in my life I hardly ever follow recipes to the letter...they are references and reminders... there were unscripted variations.  Pork broth!  And white wine (cheap pinot grigio).  Hawaiian red salt.  And a fresh-gound pepper blend, interesting because, not only does it include black, white, green and pink peppercorns, it also has coriander and allspice.  (Probably the floor sweepings of the pepper factory, it's a little like a men's cologne. Just needs a little patchouli and cardamom.)   I've moved way beyond Campbell's Cream of Mushroom,  to say nothing of Fannie's concept.

When I was in grade school, my  clever mother used to put Campbell's CoM in my Roy Rogers and Dale Evans lunch box thermos: I had hot soup for lunch.  But my schoolmates ostracized me.  Mushrooms were poisonous.  (Mom also sometimes filled my thermos with more conventional tomato or vegetable soup with a cooked hot dog tied on a string suspended in it.  I could pull it out and put it in a bun. The kids thought that was kind of cool.)

Those tiny delectable diced mushrooms in Campbell's canned white sauce were the only mushrooms I knew (and loved) until I got married and started to cook myself.   Then I got Fannie Farmer and found out I could outdo Campbell's...so easily.

The Christmas cactus continues to develop.   This and the kolea are my confirmations of the tao at work. 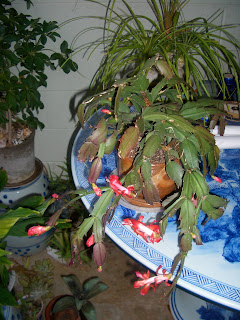 Posted by baroness radon at 7:45 PM

Butter and cream make everything better!
I seriously do not like mushrooms (except my friend's mom's, she owns a catering business, and they are huge and stuffed and delicious), but my husband LOVES them.
He would love it if I made him this soup.
Hmmm...
Guess he better be very, very good to me. :)